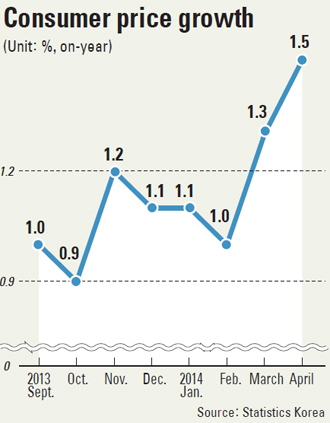 The April growth largely stemmed from a 2.3 percent increase in core inflation excluding agricultural and petrochemical prices, marking the highest in 26 months.

The increased spending on services includes higher expenditures on child care and education because government subsidies for child care adopted in 2012 no longer have a tempering effect on inflation. From 2012 through last year, the government expanded free child care, which helped contain consumer price growth.

However, the growth seemed more significant last month due to a base effect stemming from very low prices last year, the Ministry of Strategy and Finance said.

There have been worries about deflation in the Korean economy over the past year.

Month to month, the inflation rate has been declining, from 0.5 percent in January, 0.3 percent in February, 0.2 percent in March and 0.1 percent in April.

Prices had been falling since a 1.2 percent increase in November.

In the second half of last year, the Bank of Korea and many private experts expressed concern about possible deflationary pressures as consumer prices maintained growth of less than 1 percent, far below the BOK minimum inflation target of 2.5 percent.

“April prices show that month-on-month growth seems to have stabilized, but due to the base effect from last year, year-on-year growth turned out to be higher,” said Lee Dae-hee, director at the consumer price policy bureau at the Finance Ministry. “Consumer prices are projected to grow less than 2 percent throughout the year, but year-on-year growth may keep looking significant due to the base effect.”