After establishing himself successfully in the television drama industry, director Lee Jae-kyu moved on to the silver screen to project King Jeongjo, the 22nd ruler of the Joseon Dynasty (1392-1910).

Based on historical records, Lee explores the 24 hours of a sultry night in 1777, when barely a year had passed since the young king came to the throne.

King Jeongjo stays vigilant at night, fearing constant threats from masked assassins. Conspiracy hovers around the royal palace, and Jeongjo cannot trust his own family because there has been too much political drama throughout the years.

Yet the king still believes that he can reform the old paradigm of Joseon society, and with strong conviction he seeks a way to change it.

Actor Hyun Bin’s interpretation of King Jeongjo is original in that, compared to his predecessors, he tries to convey the masculinity of the king.

Experienced actor Jo Jae-hyun plays an integral role in the plot, while Jung Jae-yeong, of the recent thriller “Broken,” supports the story with a significant performance as the king’s servant.

Assistant director Ko Rak-sun, who was behind the 2013 film “Face Reader,” adds excellent visual art to revive the 18th-century story.

Actor Ryu Seung-ryong has challenged himself in the new action flick “The Target,” which was one of the most anticipated films to open in April.

Yeo-hoon (Ryu) gets involved in a mysterious murder case and is now being chased by detectives for a crime he didn’t commit.

Doctor Tae-joon (Lee Jin-wook), who is happily married to a lovely wife (Jo Yeo-jeong), gets a phone call asking him to release Yeo-hoon from the hospital. If he fails, his wife will be killed.

But Yeo-hoon escapes the detectives and vows to help Tae-joon get his wife back safely. The plot, which is based on the 1967 American film “Point Blank,” is a fast-paced depiction of the 36-hour chase with full action scenes.

The detectives are played by veteran actors Yoo Joon-sang and Kim Sung-ryung.

Ryu is acclaimed as an actor for playing versatile roles such as “Miracle in Cell No.7,” where he played a mentally ill father, and in the costumed drama “Masquerade” (2012), where he took on a comical role as the king’s adviser. “The Target” is Ryu’s first attempt at an action film, and industry insiders are excitedly waiting to see what he has to offer in this genre.

Blue Sky Studios, which hit the jackpot with the “Ice Age” animation series in the 2000s, was again successful when it released “Rio” - an animation about a family of birds - in 2011. The studio is now back with its follow-up “Rio 2,” and has returned with most of the same characters from the first one.

City bird Blu (voiced by Jesse Eisenberg), his wife Jewel (Anne Hathaway) and their three children embark on an adventure to the Amazon jungle, expecting to find some of their relatives.

On arrival, Jewel and the three children adjust well to their new environment, but for Blu, everything is uncomfortable and frightening.

The parrot couple’s old enemy Nigel reappears in the new film, following them to the jungle for revenge.

For the Korean-dubbed version, some of the nation’s hottest stars are involved, including Si-wan from ZE:A, Sunny from K-pop group Girls’ Generation and actor Ryu Seung-ryong. 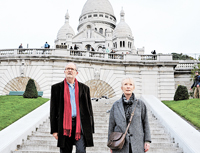 Love stories about middle-age couples are popular themes in theaters these days, as shown in the currently screening U.S. film “The Face of Love” and the cheerful domestic movie “The Venus Talk.”

Celebrating their 30th anniversary of marriage, Nick (Jim Broadbent) and Meg (Lindsay Duncan) revisit Paris, where they enjoyed their romantic honeymoon. However, after 30 years of living together, you cannot find a hint of romance between them, and Paris is far from how they remember it - probably because they are no longer blinded by love.

Just when you think the complaining and quarreling will not cease between the two, they start to find ways to reconnect with each other; this time in a deeper and more fundamental way.

“Le Week-End” is directed by Roger Michell, who is famous for his amiable rom-com “Notting Hill” (1999), which starred Hugh Grant and Julia Roberts.

The movie also explores some of Paris’ most glamorous secret spots.

Everyone has a skeleton in their closet. And for Richard (Jeff Daniels), it is his imaginary friend Captain Excellent (Ryan Reynolds). The red-and-blue superhero figure has been there since Richard’s childhood and has followed him everywhere, telling dull jokes and giving unhelpful advice.

Richard, a washed-up writer, struggles to get a start on his second novel because nothing seems to inspire him.

To make matters worse, things are not going well with his wife, Claire (Lisa Kudrow), who is a successful doctor in New York. Left alone in Long Island while his wife works in the big city, Richard seeks someone he can depend on for comfort.

Of course, the Captain is of no help.

Then, one day, Richard comes across Long Island high school girl Abby (Emma Stone) and hits it off with her. The two come to develop an unlikely friendship, but not in a romantic way. Abby teaches him some valuable things in life and considers Richard’s quirkiness as one of his many charms.

With his wife’s suspicions about Abby casting a pall over their relationship, will Richard be able to make a real friend for the first time in his life?

Although Chris Evans created a buzz in Korea during his visit as Captain America, there was another superhero loved by audiences in the nation: Spider-Man.

In the relaunch of the film series in 2012, Andrew Garfield proved that he can add new color to the Spider-Man role, successfully removing the vestige of Tobey Maguire’s take on the iconic character.

The new American heartthrob does seem used to his life as Peter Parker, aka Spider-Man, both on and off the silver screen.

Since its reboot in 2012, the “Amazing Spider-Man” series has tried to distance itself from its predecessors, not only in the cast and production team but also in its perspective toward the hero and the city the story is based in.

In the sequel, the villain has become more formidable, mirroring how Peter has grown up compared to in the past. As his friend Harry Osborn (Dane DeHaan) joins Peter in fighting crime, it becomes clear that Oscorp is once again behind the evil acts that keep arising.