Through the eyes of a Korean boy adopted by a Belgian family, “Approved for Adoption” examines the notions of self-identity, the homeland and belonging. Provided by KBS Media

While capitalizing on growing pains in artistic endeavors is not exactly a new phenomenon, for Korean adoptee and animator Jung (Jeon Jung-sik), telling the story of his life through the animated documentary “Approved for Adoption” (Couleur de peau: Miel), meant bridging the two parts of his identity that are “not completely European and not completely Korean.”

It was also an opportunity for Jung to understand why he was given up for adoption and how he would be received by the country that let him go.

At a press conference on Tuesday, Jung expressed his nervousness over the opening of his film later this month. Despite the fact that his movie has picked up 23 awards and has been screened at 80 film festivals around the world since 2012, Jung said he is mostly curious to find out how Koreans would receive it.

It is this same curiosity about what his motherland and its people think that prompted the filmmaker to tell the story of his life.

But, visiting for the third time, Jung said that his home country is growing on him.

“Every time I visit I feel like I found home, and with each visit I find out more about who I am,” he said. 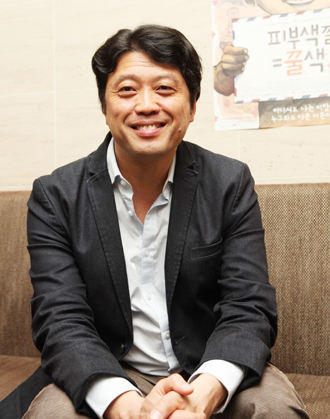 Director Jung tells his tale as a Korean adoptee brought up by a Belgian family. Provided by Mano Entertainment

This fixation on identity and ties to his motherland is an issue that Jung has grappled with ever since he was adopted by a white Belgian family at the age of 5.

Told through the eyes of the child with the “skin color: honey” - a description on his adoption documents that is also the film’s French title - Jung’s movie depicts the plight of being different and the universal desire to belong.

Humor ties with tears throughout the film, such as when Jung asks a friend if she would date an Asian. There are touching moments, too, like when Jung asks his sister if she “really thinks of him as a brother.”

“Usually, films based on adoptees always victimize the adoptees,” Jung said, adding that he tried hard “not to victimize or judge anyone.”

But it’s a harrowing tale, even without any finger-pointing, as is illustrated by Jung’s transition from adoptee to family member, followed by some rebellious teenage years.

“When I was young, I was mad at Korea because of the number of kids they give up for adoption,” said Jung.

His anger manifested itself in a bizarre way: “I started to obsess over Japan,” he said, an Asian country that has an uneasy relationship with Korea but one that did not reject him.

Jung explained that after much soul-searching and self-loathing, he realized he had to accept his country of origin to come to peace with himself.

But it was his work on “Approved for Adoption” that finally allowed him to come to terms with his identity.

“After I did that I found peace, and now I’m proud to be Korean,” Jung said.

During his 2010 visit to Korea, which was “not for the scenery but to talk to Koreans,” Jung devoted his time to discovering why he was abandoned by his biological mother.

“I looked for why Korea did that and found out that the country was extremely poor,” said Jung, adding that he noticed the reasons for giving up babies for adoption have changed over the years.

“In the ’60s and ’70s, Korea was really poor, but then in the ’80s it was more about shame and stigma for single women to raise kids,” said Jung.

He was ultimately unable to find any traces of his mother.

While Jung knows he was lucky because he was taken in by a loving family, he said that not all adoptees are so blessed. His road to self-discovery, both in real life and on screen, is poignant and is not all that uncommon among adoptees.

“A lot of adoptees have this emptiness and choose death,” Jung said. In the film, the plight of both Jung and his younger sister, Valeria, who is also adopted, illustrates this sense of confusion surrounding identity.

“The reason for making the movie was to draw attention to this ongoing problem,” said Jung. “Giving kids up for adoption abroad has to stop.”

And while his stance on Korea’s notorious record of exporting babies is clear, Jung said his sentiments toward the land of his birth are no longer as fuzzy as they used to be.

“I was born here, and over time, I found out I had to accept my roots. I realized this the more times I visited Korea.

“I’m not completely European or completely Korean. What’s important is that you have to accept yourself as you are.”

And although the cartoon tells the tale of a wayward child who tries to escape from his past, Jung said that he now knows how he feels about his motherland.

“Usually, when a mom tells a child, ‘go away,’ ‘I don’t like you,’ or ‘I don’t love you,’ they still love his mom. That’s like the relationship between Korea and me.”

The film opens May 7.