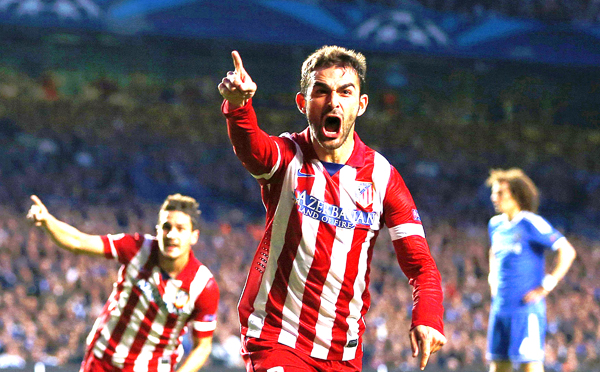 Atletico Madrid produced an inspired display of counterattacking football to beat Chelsea, 3-1, in the Champions League semifinal second leg on Wednesday and set up an all-Spanish final against city rival Real.

Goals from Adrian Lopez, a penalty from Diego Costa and the killer third from Arda Turan 18 minutes from time gave Atletico a 3-1 aggregate victory after last week’s goalless draw in Madrid to send it into the final of Europe’s elite competition for the first time since 1974.

Chelsea took the lead after 36 minutes when former Atletico favorite Fernando Torres scored with a deflected shot, but the goal inspired the La Liga leaders, who will now meet their neighbors on May 24 in Lisbon in the first European final in any UEFA competition to feature two clubs from the same city.

“The truth is the team was brilliant,” Atletico forward Costa said in an interview with Spanish television broadcaster Canal Plus. “We have done everything possible to get to the final. Both Real Madrid and us are deserving finalists.”

Atletico knew that if it scored one goal, Chelsea would need at least two to win the match in 90 minutes and they did not panic even when they went behind to Torres’s opening strike.

Torres, linked with a move back to his boyhood club after three disappointing seasons at Chelsea, did not celebrate the goal against his former club, but the hosts did not have the chance to celebrate for too long, either.

Coach Diego Simeone set up Atletico in a cautious defensive 4-4-2 formation and counterattacked with great pace, and that adventure paid off when they equalized a minute before halftime.

Chelsea coach Jose Mourinho, who also set up his team to defend deeply to cope with Atletico’s swift breaks, watched in amazement as poor defending allowed Atletico to draw level in the 44th minute.

He was even more astonished in the second half as Atletico totally dominated his flat-looking side, taking control of the midfield where Koke, Turan and the tireless Costa overran Eden Hazard and Cesar Azpilicueta, who faded on the right as the game wore on.

Mourinho now has lost his last four Champions League semifinals after three defeats with Real Madrid and his dream of becoming the first man to win the trophy with three different clubs in his home capital of Lisbon faded as the evening got worse.

Atletico took advantage of poor Chelsea defense for the equalizer a minute before halftime when the home team failed to clear a floated cross from former Chelsea midfielder Tiago to the unmarked Juanfran who stole in at the far post.

He crossed for Adrian Lopez whose shot bounced down on its way into the net.

Atletico, which held the away goal advantage with the score at 1-1, refused to sit back and was rewarded after an hour when Eto’o, who had replaced Ashley Cole only six minutes earlier, fouled Diego Costa to concede a penalty after an hour.

The Brazilian-born newly capped Spain international was shown a yellow card by referee Nicola Rizzoli for taking too long to settle the ball then making a mark on the turf with his boot before taking the kick.

But despite that delay, he showed nerves of steel and blasted the ball past Schwarzer to make it 2-1 before Turan sealed a glorious victory as Chelsea’s dream of a third appearance in the Champions League final in seven years was left in tatters.