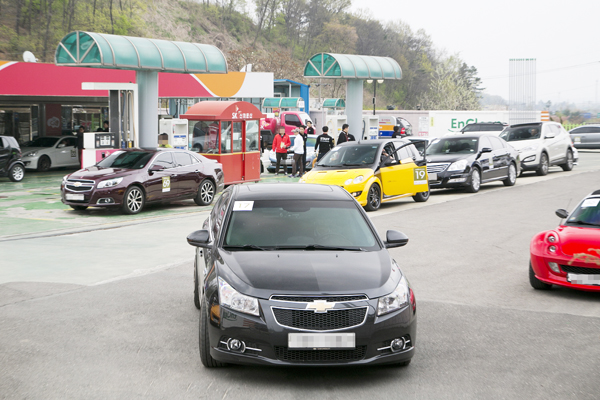 Cars line up at a gas station in Paju, Gyeonggi, on April 19 for SK Encar’s 2014 Eco Driver Contest.Provided by SK Encar

A vehicle’s fuel efficiency has become one of the most important factors for customers going car shopping these days as gas prices stay high. Concerns over fuel efficiency are reflected in the rising popularity of diesel cars and hybrids.

But for those who don’t have the means to purchase new fuel-efficient cars, there is a simple way to save money with your existing car. Why not change your driving habits?

According to the Ministry of Land, Transport and Infrastructure, the 4,933 people who attended its fuel-efficient driving education program last year reported a 34.38 percent fuel efficiency improvement in their cars.

Fuel-efficient driving habits were also showcased at SK Encar’s Eco Driver Contest held April 19. In its third edition, the contest organized by Korea’s largest used car dealer gave an award to the driver who increased the car’s fuel efficiency the most.

This year, a total of 86 drivers competed in the event‘s “full-to-full“ category. Contestants must first fill up their cars’ fuel tank at a gas station near Imjingak Pyeonghoa-nuri Park and drive 180 kilometers (111.8 miles) from Paju to Hanam, Gyeonggi. They then refill their tank to calculate fuel use and driving distance.

The winner of this year’s contest was 38-year-old photographer Moon Sun-ok who got 47.9 kilometers per liter (112.6 miles per gallon) driving his 2004 Smart Fortwo Coupe.

The distance between Seoul and Yongin, Gyeonggi is roughly 47.9 kilometers. It costs 2,000 won ($1.94) to travel between the cities taking bus No. 5000, but Moon can pay less by putting only one liter of gasoline into his car. On Monday, the average gasoline price was 1,873 won per liter. 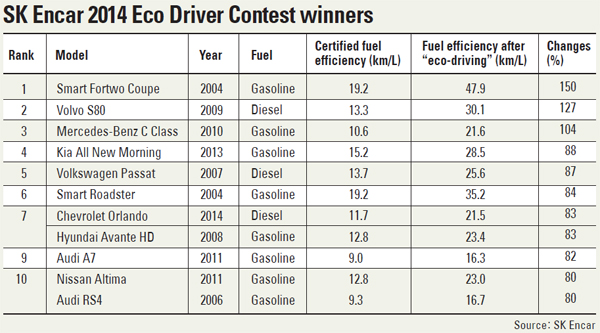 The mini car from Smart, a subsidiary of Germany’s Daimler AG, has an engine displacement of 700cc, and though it has automatic transmission, it is also equipped with a dry clutch to increase its fuel efficiency.

Considering that the car’s certified fuel efficiency is 19.2 kilometers per liter, Moon’s record of 47.9 kilometers per liter is surprising. He said that his secret is to find out exactly how the car will perform given the conditions of the road before driving. “I stuck to basic rule, which was to have enough space between the front car and follow traffic flow with enough time,” said Moon, who was a passenger of one of last year’s contestants. “Entering the highest gear level as quickly as possible and maintaining the lowest rpm [revolutions per minute] is also key.”

SK Encar also recognized the driver who had the smallest discrepancy in his or her predicted gas mileage. To win the category, the driver needed to know his own driving habits, as well as the change in the car’s fuel efficiency levels between city driving and highway driving.

Yoon Hyung-jong won the prize driving his gas-powered 2004 BMW 3 Series. The 32-year-old predicted he would have a fuel efficiency of 13.6 kilometers per liter, and he was spot on. “I regularly check my car thoroughly to enhance fuel efficiency,” Yoon said. “In this contest, I just followed my normal driving habits, which are to avoid quick braking, quick acceleration and not step on the gas pedal on a slope.”

Besides learning good driving, experts said another way to save on fuel is to check tires. According to German chemical company Lanxess, rolling resistance of tires accounts for 30 percent of fuel consumption.

“Changing No. 5 rated tires to No. 1 rated tires will increase fuel efficiency 6.9 percent,” Kemco said. “For a car that gets 14 kilometers per liter, this would result in savings of more than 120,000 won per year in fuel costs.”

The oxygen sensor is part of a vehicle’s emissions control system and feeds data to the engine management computer, which controls the fuel injection level. This part should be checked every 80,000 kilometers, according to German auto parts manufacturer Bosch.

The company also advised that drivers change their fuel filter every 30,000 kilometers to 40,000 kilometers, as a dirty filter can cause poor fuel injection. Bosch said that spark plug checks should be checked regularly so that it does not wear out, which would limit fuel combustion.