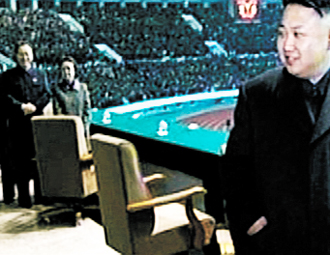 Kim Kyong-hui, the aunt of North Korean leader Kim Jong-un, appeared again in a documentary broadcast by Korean Central Television on April 20. She is shown above standing behind her nephew, Kim Jong-un, at a football stadium. Her appearance comes just five days after she was edited out of another documentary on April 15, Screen capture from KCTV

Kim Kyong-hui, the aunt of North Korean leader Kim Jong-un, has appeared again in a documentary aired by state media after she was once edited out of official footage following the purge and execution in December of her husband Jang Song-thaek.

Kim’s aunt appeared twice in the documentary standing behind her nephew at a football stadium, the KCNA report showed.

The documentary, in which she was not edited out, was first broadcast Feb. 11 by state media.

On April 20, North Korea also released a photo of her in another documentary depicting late leader Kim Jong-il’s visit to a local textile factory in Pyongyang. She was standing second from the right of the late leader, her older brother, in front of one of the venue’s offices.

Seoul officials assumed she could have been dismissed from her post as a secretary of the ruling Workers’ Party, given the fact that she was edited out of a KCNA report on April 15 regarding Kim Jong-un’s visit to the Kumsusan Palace of the Sun, the mausoleum where his father, Kim Jong-il, is interred.

At the time, the footage in which she was shown walking along Kim and other high-ranking officials, was replaced by another scene that excluded her.

Being removed from state media footage or official photographs in North Korea is widely interpreted among analysts as a sign that a person or official has been purged or shunned from the political arena.

“We assumed Kim Kyong-hui had been purged as of April 15,” a South Korean government official told reporters yesterday.

“But now she has appeared again, in a rare case, and we are trying to figure out why. It’s hard to say if she was dismissed.”

The fate of Choe Ryong-hae, the director of the General Political Bureau of the North Korean Army, regarded as part of Kim Jong-un’s innermost circle since Jang’s execution, has also been closely monitored by officials in Seoul.

Choe, Kim’s special envoy to China, appeared to have been purged as a result of health problems, Cheong Seong-chang, a senior analyst at the Sejong Institute, said yesterday in his column.

Choe was apparently replaced by Hwang Pyong-so, the first deputy director of the ruling party’s Organization and Guidance Department, who was recently promoted as one of North Korea’s six vice marshals, Cheong said.

On Wednesday, North Korea’s official newspaper, the Rodong Sinmun, reported on Kim Jong-un’s visit to a newly built textile factory in Pyongyang, adding that he “ordered the director of the General Political Bureau to console workers” in the factory. It did not, however, mention the director’s name.

The newspaper also said that Hwang - not Choe - accompanied Kim on the “field guidance trip” to the factory.

“On May Day, North Korea usually convenes a dance and banquet in the evening where the director of the bureau appears,” a Seoul official told reporters yesterday.

“You will be able to confirm whether Choe was replaced by someone or not at the banquet, which is broadcast by state media.”