Cheonan families pitch in for the Sewol bereaved

Cheonan families pitch in for the Sewol bereaved 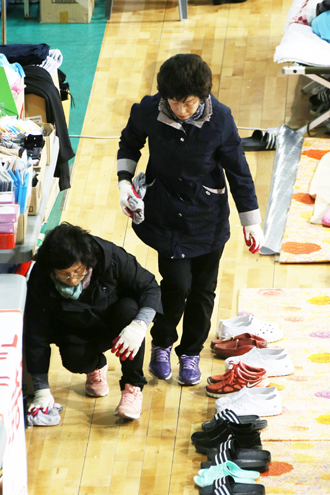 Relatives of sailors killed in the sinking of the Cheonan warship in March 2010 volunteer Wednesday to clean up Jindo Gymnasium where relatives of missing passengers of the ferry Sewol are staying. By Kim Sang-seon

Last Wednesday, 28 of the relatives of the Cheonan victims travelled to the gymnasium in Jindo, South Jeolla, that is the temporary home of the families still waiting for the remains of their loved ones to be extracted from the sunken ferry. As of yesterday 82 of the ferry’s passengers were missing.

The Cheonan relatives came for four days of volunteer work. When they arrived, they put on the green vests used by volunteers and started cleaning and helping with laundry. They didn’t identify themselves or explain their connection with tragic deaths at sea, worried that the emotional families would think they were trying to get publicity for themselves.

Some of the 28 Cheonan relatives took time off from work, making a financial sacrifice to travel to Jindo.

Some even had to give up their livings for a few days or took time off from workplaces.

“I came here as a kind of pay-back for what we received after the Cheonan incident,” said Lee In-ok, the spokesman for the 28. “We cannot forget the help and kindness we received during our time of deep sorrow.”

Lee lost his son Staff Sergeant Lee Yong-sang when the warship was blown up, which the government blames on North Korea.

“It felt like my son was still alive even a year after the incident,” Lee said with tearful eyes. “Nothing can really console the families of the victims of the ferry accident at this point. We know we will not get close to the families of the missing people. But we hope we can share the pain just by being here for them.”

The 28 visitors wanted to come right after they heard the news about the accident but decided to wait a while because they thought they might attract too much attention.

“Crying, shouting and venting their emotions will be helpful for the families of the missing passengers,” one of the 28 visitors said. “Rather than talking to the upset family members, it’s best for us to just stay here and look after them so they eat and stay healthy.”

There are around 50 relatives of missing passengers still camped out in the gym. They spend their days waiting for news from the accident scene. The remaining families are almost envious of families who were able to leave after the remains of their loved ones were found.

“I’m now worried they may never find the corpse,” said one relative.

Some go to nearby Paengmok Harbor to look at the ocean in the direction of the sunken ferry.

After the rescue team discovered the corpse of a missing passengers 2 kilometers (1.24 miles) away from the accident scene, the authorities are now searching a 12-km radius around the ship.