Director of ferry probe removed over links to Semo Group

Director of ferry probe removed over links to Semo Group 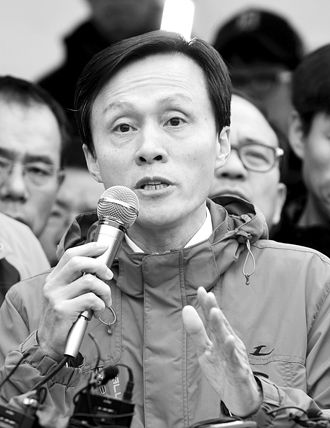 The director of the intelligence and investigation bureau of the Korean Coast Guard leading the probe into irregular practices of Chonghaejin Marine Company, the operator of the ill-fated Sewol ferry, was removed from his post yesterday after reports surfaced he had ties with the now-defunct Semo Group, the Chonghaejin Marine Company’s predecessor.

The Coast Guard announced on Wednesday that Lee, 53, had worked for Semo Group for eight years since 1991.

It added that he transferred there from another company after he started worshipping at the Evangelical Baptist Church, also known as the Salvation sect.

Yoo Byung-eun, the de facto owner of Chonghaejin, is reportedly the leader of the pseudo-Christian cult and currently stands accused of forcing members of the group to invest in companies run by him and his sons.

The elder Yoo and his family are currently accused of a slew of charges, including tax evasion, embezzlement, illicit foreign exchange deals and mismanagement.

KBS reported on April 23 that more than 90 percent of the operator’s workers subscribe to that religion, citing from a source who only identified himself as a “former employee.”

Prosecutors previously investigated Yoo in 1987 on suspicions that he was behind the mass suicide of 32 religious believers. At that time, he served as a minister of the cult.

“I washed my hands with the Salvation sect after moving to the Coast Guard,” Lee said yesterday in a press conference. He added he “didn’t hide [my] previous work experience at Semo Group” during his tenure at the Coast Guard.

Lee was accepted at the Coast Guard as chief superintendent in 1997, the same year Semo Group went bankrupt. He was promoted to assistant commissioner in 2011, and became the director of the intelligence and investigation bureau the following year.

According to the Coast Guard, during his affiliation with the company, the Semo Group funded Lee’s studies when he was working toward his doctoral degree at Pusan National University in Busan. In his doctoral dissertation, he even acknowledged his gratitude toward the elder Yoo, 73, Semo Group’s founder, expressing his sincere thanks for “giving [me] the opportunity to study.”

Lee pointed out at the briefing yesterday that he wrote those comments as a courtesy as a company employee.