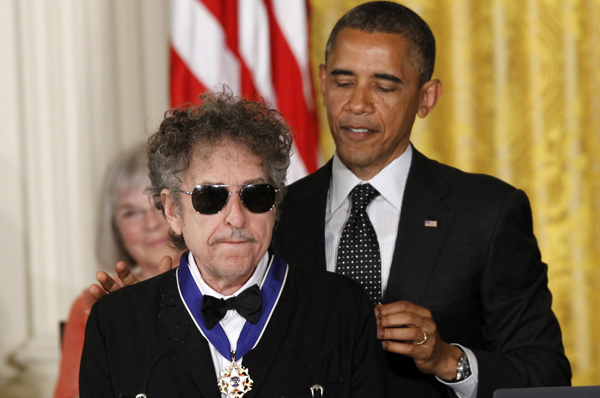 NEW YORK - Bob Dylan’s four-page original manuscript for “Like a Rolling Stone” - considered to be one of the greatest rock songs ever - is expected to fetch $1 million to $2 million when it is put on auction in June, Sotheby’s said on Thursday.

Dylan’s 1965 anthem addressed to “Miss Lonely” and asking “How does it feel, to be on your own, with no direction home” was a breakthrough for Dylan and the music industry.

It not only established the former folk singer as a rocker but also, running more than six minutes, was almost double the length of pop songs that got radio air time in that era.

“In this near complete four-page working draft the distinctive often repeated ‘how does it feel’ lyric is clearly visible alongside unused lines, stray thoughts on American cultural imagery, and interesting doodles,” Sotheby’s said in a press release.

Richard Austin, the expert in charge of the sale, commented: “This is the Holy Grail of rock lyrics. The release of “Like A Rolling Stone” irreversibly changed postwar music history with one song, Bob Dylan elevated rock music from mere ‘pop’ to the medium though which youth culture expressed itself.”

Posters for an Elvis Presley concert and for a Rolling Stones concert in Parisare also on sale.