Characters come out to play on Children’s Day

Characters come out to play on Children’s Day 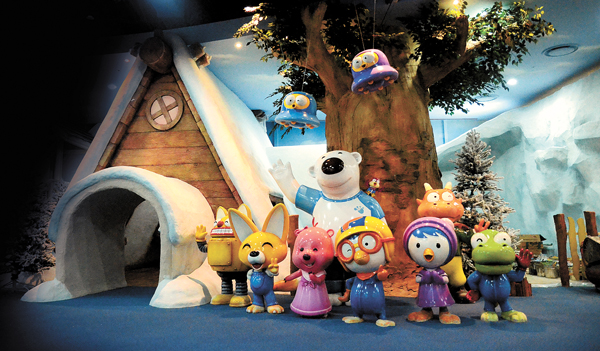 It’s that time of the year when parents have to think hard about how to amuse their children and when aunts and uncles try to find the perfect present for their nieces and nephews. May 5 is Children’s Day, a public holiday in Korea.

If you’ve been agonizing about how to entertain your children over the long weekend, here’s a very easy and effective tip: make use of their all-time favorite animated characters.

It’s a fact that a blue penguin called Pororo has stolen the hearts of thousands of children in Korea. And Hello Kitty toys have long been a must-have for many little kids.

The JoongAng Ilbo has selected several character theme parks across the country that are sure to appeal to children everywhere. These amusement areas will likely be jam-packed with families on this national holiday, but they’re still sure to guarantee a thumbs-up from the little ones.

Pororo, from the Korean cartoon series “Pororo the Little Penguin,” has become an international sensation, and Jamsil’s Pororo Park is an indoor playground that makes the world of Pororo a reality.

The characters from the show greet visitors inside a building that houses a small carousel, bouncy castle, bumper cars, Pororo trains and much more.

Similar theme parks are located in other parts of the country, such as the one in Guro District, southwestern Seoul, and Ilsan, Suwon and Gwangju in Gyeonggi.

At 2,750 square meters (29,600 square feet), however, the Jamsil branch is the largest. It is divided into 16 theme areas, including a Pororo cafe, Pororo sand box, Pororo train station, and a favorite of children, the 3-D animation zone.

As well as enjoying the opportunity to see three-dimensional Pororo cartoons in this section of the park, kids can watch characters perform on stage five to six times a day.

A sing-along show is also held, where kids can sing the theme tune of the animation with the characters.

On Monday, which is Children’s Day, there is a 50 percent discount on the children’s entry price while admission is free for adults.

Jeju’s Teddy Bear Museum is enjoyable for kids and adults. As well as exhibiting thousands of teddy bears, the first floor of the museum includes a detailed history of these stuffed toys. There are rare bears from across the globe and classic teddies that date back 100 years.

The history of humans is even conveyed by these cuddly toys, such as the first Apollo moon landing and the fall of the Berlin Wall.

In the art section, paintings such as Van Gogh’s “Self-Portrait” and Michelangelo’s “The Creation” are exhibited, teddy-bear style.

There’s even a Louis Vuitton bear adorned in clothing from the luxury brand. The cuddly designer toy was auctioned off in Monaco for 230 million won in 2000.

In the museum’s garden sits a gigantic nine-meter-wide, 1.2-ton teddy bear named Slo that’s a favorite of kids, while teddies dressed up as famous stars like Michael Jackson, Audrey Hepburn and Steve Jobs are displayed inside the photo zone.

Entrance fees cost 8,000 won for adults and 6,000 won for children. A 10 percent discount is available for visitors with children until May 10. 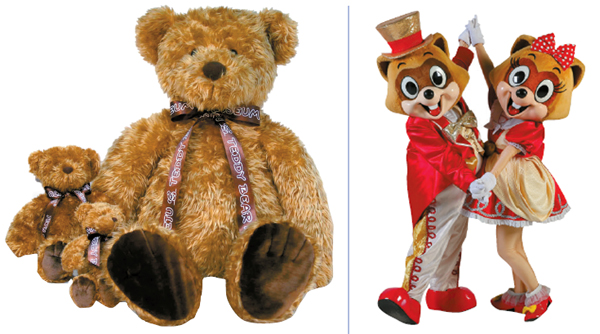 An amusement park full of thrilling rides and spectacular sights is a popular spot for children on their special day.

Lotte World in Jamsil District has two raccoon characters that children love. Lotty and Lorry were created when the theme park was established in 1989 and are painted or appear as figures on most of the rides, from bumper cars to roller coasters.

Popcorn buckets and beverages featuring these cartoon animals are popular items for families to buy at Lotte World.

Life-size versions of Lotty and Lorry also appear in the park’s parades, which are a highlight for children visiting theme parks. The processions bring in dozens of characters to delight youngsters. Full-size Lotty and Lorry also walk around the park throughout the day, each appearing in at least seven different outfits.

It may look like just the same old city bus to adults in Seoul, but for kids, Tayo Bus is their dream ride. The nationwide project’s buses are decorated with characters from the animated television series “Tayo the Little Bus.”

The scheme was initiated in March as a one-month event to mark National Public Transportation Day, but thanks to its popularity, especially among kids, the Seoul city government decided to extend its operation until May 5 and increase the number of Tayo and friends’ buses from four to 100.

If your child is begging you for a ride on one of Tayo’s buses, it’s best to start near bus garages such as the one in Suyu-dong, Gangbuk District.

For families outside of Seoul, other cities have adopted the Tayo Bus. There are four buses each in Seongnam, Gyeonggi; Suncheon, South Jeolla; and Andong, North Gyeongsang.

Check routes and the whereabouts of Tayo Buses by using an online map provided by Internet portal Daum at map.daum.net. Fares and routes are the same as other buses. For more information about Tayo Buses call (02) 120. 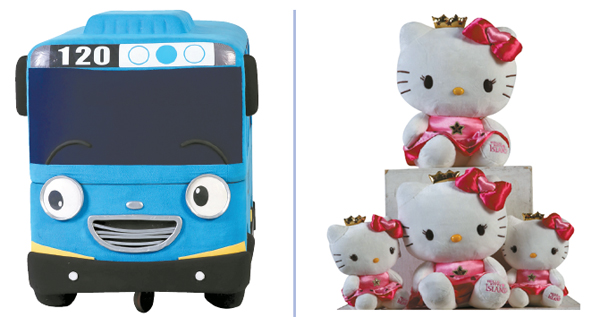 The Japanese cat that appears on millions of children’s items, from pencil cases to school bags, has been loved by generations of children since 1974. And in Korea, a Hello Kitty-themed museum was established last December in Seogwipo, Jeju.

Upon stepping foot inside the Kitty House, young children cry out in amusement as everything from floor mats to chairs are decorated with Hello Kitty.

There are various activities to enjoy in the pink-filled, two-story Hello Kitty Island.

In the Kitty History Zone, meanwhile, visitors can discover the history of Hello Kitty, including some of the original designs of the 30-year-old cat.

In the Art Education Zone, kids and parents can sit down together to create craft items such as Hello Kitty necklaces, or drawings.

Cakes in the shape of the beloved character’s face are also available at the Hello Kitty cafe.

If you don’t want your offspring to be the only ones enjoying this upcoming holiday, visit Dongdaemun Design Plaza for the “Art Toy Culture” fair, where hundreds of uniquely designed toys by some 80 local and international artists are on display.

“Art toys are not only for kids but are also for adults, where they can express their ideas on it like a canvas or a platform,” said Space Croft, one of the hosts for the exhibition at a press conference on Thursday.

“It is something that can stand independently as part of collections or as objects d´art.”

The “kidult” demographic - people who enjoy youthful hobbies such as collecting toys or assembling Legos - is on the rise, but it still remains a niche market in Korea. The design plaza’s “Art Toy Culture” display aims to raise awareness and pave the way for adult toys to enter mainstream art culture.

“I want to convey to the people out there that there is such a genre of art,” said a participating toy creator from Korea who goes by the pseudonym Coolrain.

Coolrain has been in the industry for 10 years. “Being able to touch, make, have and collect what you like is the biggest charm of art toys as means of art,” he explained.

Inspiration for these designs come from various sources, prominent characters in Disney or Hayao Miyazaki’s animations, for example, as well as from pop, hip-hop, graffiti and skateboarding culture. 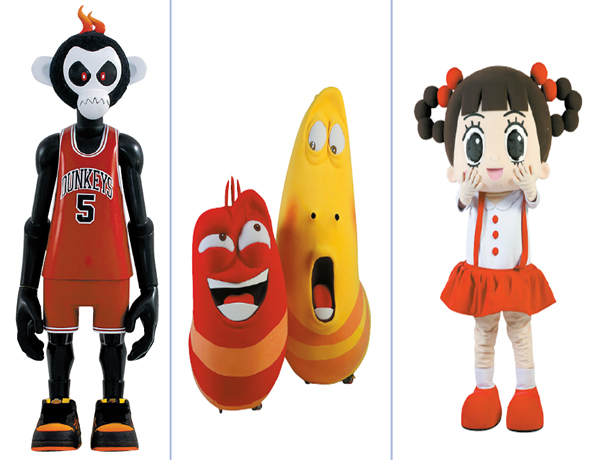 While Pororo the president of children, as he is known across Korea, makes kids go crazy, two red and yellow slugs are capturing the imaginations of local kids, too.

After noticing the popularity of “Larva,” a TV animation about a pair of mollusks that tease one another, the large theme park Seoul Land in Gyeonggi transformed one of their rides to encompass the characters.

The Top Spin, which circulates kids in the air, transformed into the Larva Twister last month.

The animated ride carves in and out of the sky, children in tow.

The two main characters, Yellow and Red, are the most popular parts of the roller-coaster to sit on, often causing kids in line to scramble into these cars.

Thanks to the Larva Twister, Seoul Land has seen 1,000 more children on this ride than usual, according to the amusement park’s officials.

Characters from “Larva” also appear at the special exhibition zone inside Seoul Land. This area includes a “Larva” photo zone, where kids can pose for funny pictures with the slugs.

Every day at 2 p.m., a parade takes place in Seoul Land, and other members of animations like Kart Rider, Pucca and Vroomiz join Red and Yellow to greet visiting children.

Various events using the characters, including magic shows, are organized at Seoul Land.

A character zone in Woongjin Play City, located in Bucheon, Gyeonggi, is a waterpark themed with characters from the animated cable network Tooniverse.

The park’s main wave pool is decorated with Jadoo, a character from the popular cartoon “Hello Jadoo.”

Rather than adopting the original settings in these animations, Woongjin Play City adapted the characters into pirates to better suit the waterpark.

Larger-than-life sculptures of the cartoons’ main protagonists are situated within the waterpark. The original designer of the animation, Lee Bin, recreated all the sculptures to suit the needs of Woongjin Play City.

There are also photo zones where children can take pictures with Iron Man and Spider-Man, as well as characters from “Avengers.”

A one-day pass costs 40,000 won for adults and 30,000 won for children. Until May 6, the waterpark offers discounts for families.

One child in families of more than three people will get a free pass. For more information, visit www.playdoci.com or call 1577-5773.