Won just keeps on getting stronger

Won just keeps on getting stronger

A trader studies the numbers at Korea Exchange Bank headquarters in Myeongdong, central Seoul, yesterday as the won strengthens against the U.S. dollar. The local currency appreciated against the greenback to close at 1,030.2. [NEWSIS]

The Korean won reached its strongest level in five years and nine months yesterday, a development that was worrisome for exporters and welcomed by financial analysts.

According to data by Korea Exchange Bank, the won’s value surged almost 4 percent in April alone, the most of any Asian currency.

Analysts who project the won will continue to appreciate express concern that the currency might have a negative impact on profitability of Korean exporters.

Even though Korea achieved its second-highest monthly exports totalling $50.3 billion in April, exporters expected to see less in revenue.

A month ago, the won hovered around 1,080 against the dollar. 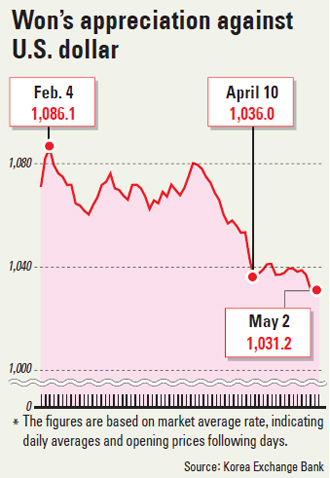 According to a survey by the Federation of Korean Industries late last year, the average break even point for 600 businesses in terms of trade was 1,066.4 won.

Korean automakers, shipbuilders, petrochemical manufacturers and electronics companies are likely to absorb a significant blow from the exchange rate.

Those industries also are concerned about the weakening yen, because they have strong Japanese rivals in overseas markets.

The yen is forecast to depreciate even more with the increase in Japan’s consumption to 8 percent from 5 percent.

“Earlier, we estimated the won would be near 1,050,” said Lee Won-hee, financial chief at Hyundai Motor, “But the rate fell much more than we expected.”

The strength of the won also is expected to influence the country’s overall economic growth further.

“If the won-dollar rate hovers around 1,050, GDP growth would stay about 3.5 percent,” said Oh Jeong-geun, a researcher at Korea Economic Research Institute. “If the rate goes further down to near 1,000 won, the growth forecast would barely reach 3.3 percent.”

Meanwhile, the country’s financial sector is welcoming the won’s appreciation.

Analysts say the strong won is likely to help rally the stock market, because if the won-dollar rate falls, that will encourage foreign capital to flow into the Korean market.

“The current rate decreases are a result of increased surpluses in trade and foreign investment,” said an analyst at a local securities firm. “The result is likely to have positive effect on the securities market.”

According to the securities industry, when the won-dollar rate plunged 34 percent between 1998 and 2007, the stock market surged more than 300 percent.

“The strong won makes local shares and assets more valuable, leading to a rally in the market,” said the analyst. He added that large exporters with production facilities abroad will be less affected by the rate decrease.

Financial analysts at home and abroad forecast the won will reach 1,000 to 1,020 by the end of the year.

Goldman Sachs projected in a recent report that the won-dollar rate would strengthen to 1,010 in the next three months.

Some analysts are aware of the U.S. dollar’s slight rise against the Korean won this month.

“There is a chance of the greenback strengthening from mid-May, considering that U.S. consumption, manufacturing and employment indices are showing upbeat signs,” said Lee Dae-ho, an analyst at Hyundai Futures.