Hyundai, Kia bounce back in U.S.

Hyundai, Kia bounce back in U.S. 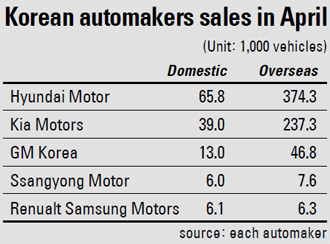 Hyundai Motor and Kia Motors, Korea’s two largest automakers under Hyundai Motor Group, have reclaimed the No. 6 spot in the United States after six months, thanks to rising sales of the Sonata and Soul.

In the world’s second-largest auto market, Hyundai and Kia combined to sell 119,783 units last month, up 8 percent from a year ago, to beat Nissan for the first time since October.

Despite a large recall, General Motors was the best-selling automaker in the United States, followed by Ford, Toyota, Chrysler and Honda.

Hyundai sold 66,107 units last month in the United States, up 4.4 percent from a year ago and a record high number for April.

Kia sold 53,676 units for an increase of 12.9 percent. Sales of the compact boxy car Soul and the midsize Optima (known as the K5 in Korea) were the automaker’s sales leaders.

Domestic sales, however, were a different story.

Hyundai’s domestic sales were led by the Sonata, the best-selling model in April, at 15,392 units. Among them, 11,904 were the seventh-generation LF Sonata released on March 24.

GM Korea sold 13,086 units, up 27.5 percent from a year ago. But the nation’s third-largest automaker was the only one to show a decline in exports in April after 46,896 units were sold overseas, 3.6 percent less than a year ago.

Renault Samsung Motors claimed the No. 4 spot with sales that accelerated 35.7 percent year-on-year to 6,153 units, which was 143 units more than Ssangyong Motor.

However, in overall sales, Ssangyong was the winner as it shipped 7,624 vehicles overseas, up 1.8 percent from a year ago. RSM sold 6,389 units last month, a 0.8 percent year-over-year increase.

The five Korean automakers sold a total of 802,657 vehicles worldwide in April, up 7.9 percent from a year ago and 1.6 percent from March.