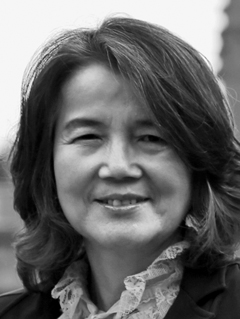 In multiple 10-minute interview clips, one Korean professor has uncovered the more personal side of England’s Oxford University.

Kim, 63, is the director of Voices from Oxford (VOX), a webcast program that features Oxford faculty, students and alumni and allows them to share their knowledge and views with the world.

The visiting professor at Seoul National University is a busy woman, often traveling between Korea and the United Kingdom for various projects. In an interview with the JoongAng Ilbo last week, Kim discussed how she started VOX and emphasized the importance of making a “today that is better than yesterday.”

Kim had a brief relationship with Oxford University in 1979, when her husband worked there as a visiting scholar. But it was more than 20 years later when she got involved with one of Britain’s most renowned schools.

While teaching English at Sogang University in Seoul, Kim received an offer from an Oxford University professor, who was impressed by her thesis in an academic journal, to join them there and collaborate on a thesis. Kim recalled that her age was a personal concern, but nevertheless, she couldn’t resist the allure of learning and education. So at 50 years old, she entered Oxford University’s Exeter College, and began her studies.

But her limited English, the generation gap, and the difference in culture forced her to shrink. This changed, however, after she went to a party and noticed that everyone there was subdued and possessed an impressive sense of “dignity” - something Kim hadn’t quite expected.

So she decided to change things up a bit and turned on some music. Soon everyone was dancing, and after that, Kim became known as the “dancing queen,” and one of the more recognizable students at Exeter College.

She studied at Oxford for four and a half years, obtaining her master’s and doctorate degrees in English language and literature.

Because she started her studies at an older age, Kim realized the importance of learning, and she decided she wanted to share that knowledge, as well as the views of the scholars at Oxford, with people worldwide.

She said that VOX, established in 2009, was created for this purpose. So far, approximately 300 people have been interviewed in the webcast series. Subjects are filmed in a documentary style and topics range from current events to academics.

“These are people who say they have lived each day faithfully, and one day they realized they had walked this far,” she said. “They didn’t make rules for how to live their lives.”