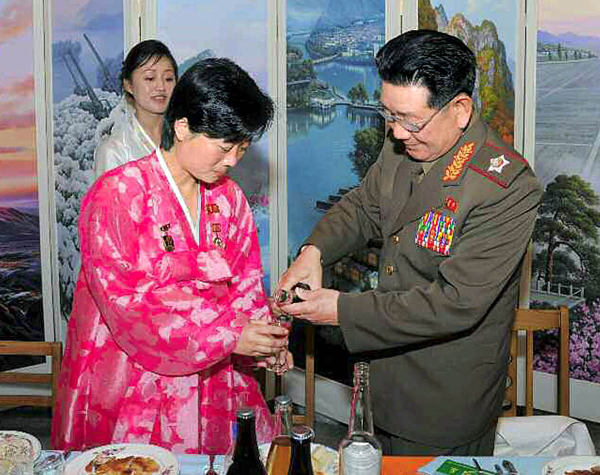 Hwang’s appointment as the military’s de facto No. 2 was confirmed by the North’s official Korean Central News Agency yesterday amid speculation over Choe’s dwindling public appearances.

The KCNA reported that Hwang, 65, was introduced as the first deputy director of the ruling party’s Organization and Guidance Department during his May Day speech on Thursday at the newly built workers’ hostel at the Kim Jong Suk Pyongyang Textile Mill.

Analysts have made light of the shift in military leadership after North Korean leader Kim Jong-un’s ascent to power. Kim has now switched up all three top military positions with Hwang’s appointment. The young commander also tapped Ri Yong-gil as chief of the General Staff of the Army last August and the relatively unknown Gen. Jang Jong-nam as minister of the People’s Armed Forces last May.

Hwang came into the public eye in the mid-2000s and emerged as a key close aide to Kim Jong-un after the death of his father, Kim Jong-il, in December 2011. He also became more prominent after the execution of Kim’s powerful uncle, Jang Song-thaek, last December.

Officials said Hwang was appointed during an April 26 meeting of the Central Military Commission, which was presided over by Kim.

“Chinese authorities have put a lot of focus on Hwang since he emerged as the behind-the-scenes heavyweight last year following the purge of Jang Song-thaek,” a Chinese source said.

Hwang was recently promoted as one of North Korea’s six vice marshals, the second-highest functioning military rank, and has been seen accompanying Kim. Choe’s public appearances, on the other hand, have decreased in recent weeks, with a few reports claiming that he may be in poor health.

Choe, also a special envoy for Kim Jong-un to China and a vice marshal, had been considered the top military official, second only to the young leader, who is the supreme commander of the North Korean Army.

Choe assumed the post of vice chairman of the National Defense Commission on April 9. He has been regarded as part of Kim’s right arm, especially with the sudden ouster of Jang. Choe is the son of Choe Hyon, a close aide to the regime’s founder Kim Il Sung.

“Hwang has for a long time supervised the military as a deputy director in the Organization and Guidance Department,” said Chon Hyun-joon, head of the Northeast Asia Peace and Cooperation Institute, “and with this kind of political organization, with someone responsible for supervising the army shifting into the general political bureau, a system where the party controls the army has been completed.”

He also pointed out that Choe was appointed as vice chairman of the National Defense Commission last month - indicating he has not been ousted.

Hwang, a graduate of Kim Il Sung University, was a classmate of Kim Kyong-hui, who is the sister to Kim Jong-il and aunt to Kim Jong-un.