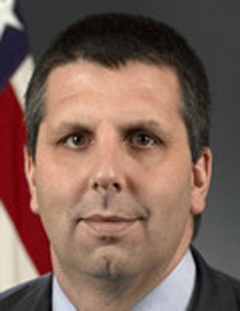 Mark W. Lippert, the chief of staff to Secretary of Defense Chuck Hagel, was nominated by President Barack Obama as the next U.S. ambassador to Seoul, the White House announced Thursday.

Lippert, one of Obama’s key confidants, is a security expert with a solid background in Asia, having served as the assistant secretary of defense for Asia-Pacific security affairs in the Obama office from 2012 to 2013.

Lippert will replace current U.S. Ambassador Sung Kim, who served as the first Korean-American envoy to Seoul for nearly three years. Kim was nominated by President Obama on June 27, 2011, and then confirmed by the U.S. Senate in October the same year. He started his post on Nov. 3, 2011.

If confirmed by the Senate, Lippert, 41, will become the youngest U.S. ambassador ever to be posted in Seoul. His Senate hearing date has not been set yet.

Lippert is a rare case as a nominee because he is not a career diplomat. He previously served as the National Security Council chief of staff and as the deputy national security director. He has earned a Bronze Star for his service in Iraq, was deployed to Afghanistan and has served as an intelligence officer for the Navy’s special operations forces.

Defense officials indicate that Lippert has a good working relationship with Gen. Curtis Scaparrotti, commander of U.S. Forces Korea, and close connections with Defense Secretary Hagel, who he has served as the general’s right-hand man over the past year.

Lippert is considered as someone with stature equivalent to Caroline Kennedy, the ambassador to Tokyo and the daughter of former U.S. President John F. Kennedy. Her appointment to Japan was closely watched in Seoul.

Seoul officials have lauded Lippert’s nomination, indicating he may provide a more direct communication channel to the White House.

“He is one of the most knowledgeable policy people on Asia in this administration,” Victor Cha, senior adviser and Korea chair at the Center for Strategic and International Studies, told Foreign Policy magazine on Thursday, adding that Lippert is well connected within the White House and the U.S. Departments of Defense and State. “Every country wants an [ambassador] who can pick up the phone and get the president’s attention.”

Lippert headed the U.S. delegation for trilateral defense cooperation talks last month between the United States, Korea and Japan on April 17 and 18, in Washington. The meeting grew out of the trilateral summit on March 25 in The Hague among the leaders of the three countries.

Defense officials say Lippert played a key role in the Pentagon’s push to strengthen defensive ties with Asian nations as the United States focuses on its pivot to the region.

He received his bachelor’s degree in political science and a master’s in international policy studies from Stanford University. He also studied Mandarin Chinese at Beijing University.