A glorious farewell for Yu-na

A glorious farewell for Yu-na 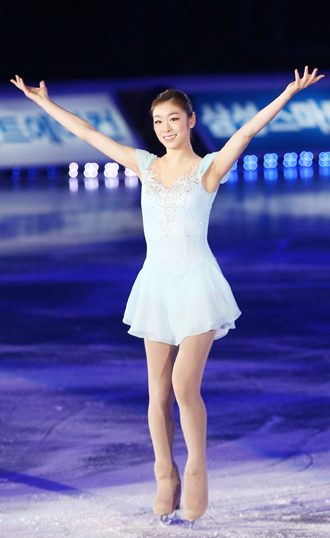 Kim Yu-na waves to fans after finishing a program during the All That Skate 2014 Ice Show held at the Olympic Gymnastics Stadium in Songpa District, southeastern Seoul, yesterday. [NEWS1]

About 10,000 fans gathered to watch Kim Yu-na glide onto the rink of the Olympic Gymnastics Stadium yesterday for her final performance of the All That Skate 2014 Ice Show.

The fans watched breathlessly as the 24-year-old performed her new gala program in a red dress as Nessun Dorma from the opera “Turandot,” written by Italian composer Giacomo Puccini.

Although she has retired from competition, her elegant moves combined with excellent jump skills drew admiration from the audience. The audience was engrossed in Kim’s four-and-a-half-minute performance, watching her skate while she looked like she was in a scene from the opera.

As the music drew to an end, audience members gave a standing ovation to their skating darling. The clapping grew into cheers as she finished the program and waved farewell.

That was it. In the three-day ice show under the theme “Adios, Gracias,” Kim, who has been the figure skating queen to all Koreans for the past decade, bid adieu to her fans and thanked them for their immense support over the past decade.

“I hoped this show could help staunch the hollow pain that grew within the victims and their families of the tragic Sewol ferry accident,” Kim told reporters after finishing the show when asked how she felt about going into retirement. “I also want to thank all the skaters who prepared very hard for this show, and their performances in the last three days were just amazing.”

Before the gala show, Kim performed a series of programs, including one to the popular song “Let It Go” from Disney’s “Frozen.” Several international skating stars - including Stephane Lambiel of Switzerland, Shae-Lynn Bourne of Canada and Denis Ten of Kazakhstan - also staged fantastic performances under the glittering lights.

After finishing the Sochi Winter Games with a silver medal and a total score of 219.11 points - 144.19 points for her long program to “Adios Nonino” and 74.93 points for her short program to “Send in the Clowns” - Kim said she would retire from competition. But yesterday, she said that her life over the past three months has not been so different from before the Olympics.

“Since it was my first time unveiling the new gala program, I had similar training schedules with the ones that I had ahead of competitions,” she said. “I thought performing my best in my farewell event is the best way to express my gratitude to fans who have been consistently supporting me. Whenever video screens showed scenes of my previous competitions and events I participated in, I felt like I’m back in the old times for a while and I think I had a pretty good time. I think everything was possible because there were so many people who always supported me.”

Kim said she hasn’t made any plans and that she will take a break for a while.

“Successfully finishing this ice show was one of the plans after the Olympics,” she said. “That actually didn’t give me enough time to take a break. I will not hurry in developing future plans for sure.”

Sources familiar with Kim said she might try to become a member of the International Olympic Committee’s Athletes’ Commission.

“I’m so sad that Yu-na has retired from competition,” said Park Mi-youn, a fan who attended the show. “I hope to see Kim skating in other events like this one in the future. I am truly thankful for what she has done for the country and wish her luck in the future.”