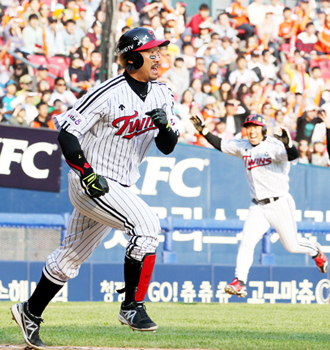 Lee Byung-kyu of the LG Twins, left, runs to first after hitting a walk-off RBI single in the bottom of the ninth against the Hanwha Eagles yesterday at Jamsil Baseball Stadium. By Kim Min-gyu

The LG Twins beat the Hanwha Eagles 5-4 yesterday, thanks to a walk-off RBI single by Lee Byung-kyu in the bottom of the ninth with bases loaded and two outs. Yesterday’s game was the 14th that the LG Twins played without a manager, but the Twins scored three runs in the eighth inning to tie the game and didn’t waste any time to end the game at their home in Jamsil Baseball Stadium, eastern Seoul.

Twins’ starter Everett Teaford allowed four runs in five-and-a-third innings, but the pitchers who followed Teaford didn’t give up a run while the hitters reversed the game. Veterans including outfielder Lee Jin-young and Park Yong-taik led the team’s hitting as they combined three RBIs.

Regardless of the result of the game, the Twins’ future is questionable as the club has been playing without a manager for two weeks.

Former Manager Kim Ki-tae still appears on the daily roster even though the team is currently led by Coach Cho Kye-hyun, who the club said is a temporary replacement. The Twins have won five and lost eight of their games since April 23.

The Twins said they are considering options for the best outcome. The club, which is at the bottom of the league with a record of nine wins, one draw and 19 loses, want to make a huge comeback to advance to the postseason for the second consecutive seasons, and they know picking the right manager is their key to success.

“There are two options, obviously,” an official from the Twins said. “One is hiring someone from outside the ball club and the other is to promote someone within the team.”

And it looks like the Twins think promoting Cho to manager is the best choice for the team.

“We still have 100 more games to play,” the official said. “If we bring someone from outside, he will certainly need some time to study the team, and we think this isn’t an appropriate choice we could make in the middle of the season.”

Cho wanted to leave the team when Kim resigned, but Kim asked him to stay to prevent the team from collapsing so early in the season.

If Cho takes charge of the team, the Twins can spend their time finding a new manager. If the coach successfully leads the club for the rest of the season, he could be one of the candidates.

“The front office of the Twins persuaded a coach who wanted to leave to stay on their bench,” a source familiar with the Twins said. “It means that they might have promised something more than just keeping his seat there. I think they will make a decision within a week.”