With a twist, Orsay brings Impressionist art to Seoul

With a twist, Orsay brings Impressionist art to Seoul 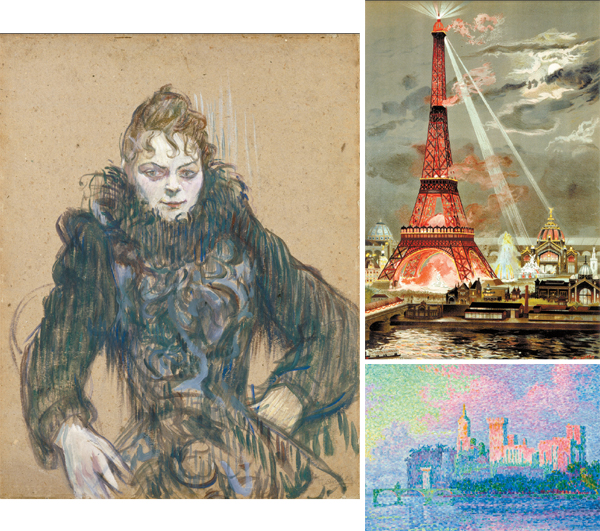 Henri de Toulouse-Lautrec’s “Woman with a Black Boa,” left, Georges Garen’s “Lighting of the Eiffel Tower for the Universal Exhibition of 1889,” top, and Paul Signac’s “Avignon, Evening,” above, of the Musee d’Orsay in Paris are in Seoul for the ongoing exhibition “Beyond Impressionism” at the National Museum of Korea until Aug. 31. Provided by the museum

If you’re planning a trip to Paris sometime before September to see Claude Monet’s “Woman with a Parasol” or Henri Rousseau’s “The Snake Charmer” at Musee d’Orsay, you might want to revise your itinerary.

These paintings will be exhibited in Seoul, not Paris, until Aug. 31.

For local art aficionados, the Musee d’Orsay, known for its collections of Impressionist work from the late 19th and early 20th centuries, has brought 175 paintings, drawings and other works of craft to Korea’s capital, providing a portrayal of Paris, where many Impressionist artists lived and worked.

It is the fourth time that the globally renowned art house has brought its collection to Korea, but none of the creations in this exhibition have been shown here before.

“Because this exhibition is something new and different from any other previous Orsay exhibition in Korea, planning for this event made me excited about the next exhibition we may get to do,” said Guy Cogeval, president of the Orsay Museum, during a press conference last week.

The National Museum of Korea, the host of the Orsay collection, wanted to curate an exhibition with a twist, differing from previous shows that merely displayed the major masterpieces from the French museum.

“We decided to put a focus on Paris,” said Kim Wool-lim, a curator for the local museum, “so that we can see what correlation there was between urban development and the beginning of the post-Impressionist era.”

The exhibition starts with some of Claude Monet and Pierre-Auguste Renoir’s works, which were painted in the early 1880s, then moves on to art by Paul Gauguin and Paul Cezanne, who depicted landscapes outside of Paris.

Toward the middle of the exhibit, however, photos of the Eiffel Tower, along with a drawing of the famous structure by Georges Garen, will be shown.

The transition to the cityscape may seem erratic, but there is a hidden agenda. “Paris was in the middle of a transformation to become modern, and the symbol of modernity was the Eiffel Tower,” said Caroline Mathieu, chief curator at the Orsay.

Although artists from the Impressionist period barely depicted the modern, urban scene that was developing in Paris, the city was in fact in the middle of change.

The transformation made many artists desire to leave the city in order to develop their ideas, Mathieu explained.

“Many who wanted to focus on painting landscapes went outside of Paris,” she said, adding that the French city has always influenced artists, even those who avoided painting it.

The development of Paris is also shown toward the end of the exhibit in a display of crafts and accessories that are likely from the same era as the paintings. For example, makeup cases and decorated combs used around the late 1800s are shown in front of portraits of refined ladies.


*“Beyond Impressionism: Masterpieces from the Musee d’Orsay” lasts until Aug. 31 at the National Museum of Korea.