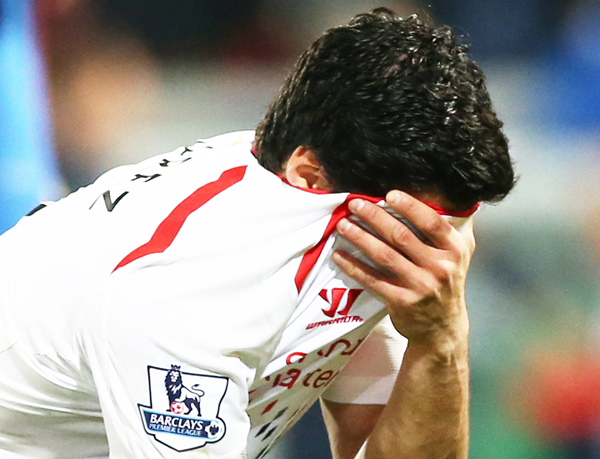 Liverpool’s Luis Suarez covers his face with his shirt after a match against Crystal Palace at Selhurst Park in London, Monday. [AP/NEWSIS]

Liverpool blew a 3-0 lead in the final 11 minutes to draw 3-3 at Crystal Palace on Monday as their desperate search for more goals left them exposed at the back and handed the Premier League title initiative firmly back to Manchester City.

Liverpool’s naivety, combined with woeful mistakes and decision-making when victory seemed assured, almost certainly ended their hopes of gaining a first title for 24 years. Although they returned to the top spot, Manchester City is now odds-on favorite to win its second title in three seasons.

Liverpool has 81 points with one match to play while City has 80 points with two matches left and a nine-goal better goal difference.

City hosts Aston Villa on Wednesday and West Ham United on Sunday while Liverpool’s remaining game is at home against Newcastle United.

Liverpool was coasting to victory and a three-point lead after goals from Joe Allen, Daniel Sturridge and Luis Suarez, who was named Footballer of the Year earlier in the day.

But Palace stormed back with two goals from substitute Dwight Gayle and one from Damien Delaney who brought Palace back into the game with a screamer in the 79th minute before Gayle’s second two minutes from time forced the draw.

The Liverpool players slumped to the ground in despair at the end with Suarez and others in tears.

Liverpool’s title hopes, already receding after last week’s 2-0 home defeat by Chelsea and City’s 3-2 win at Everton on Saturday, are now hanging by an even more slender thread and Manager Brendan Rodgers conceded their challenge was over.

“For 75 minutes it was an outstanding performance. The important thing was to win the game tonight to put some sort of pressure on City but it’s very disappointing to concede those three goals.

“It was really poor defending. Poor decision-making. We should have managed the game much better when we were 3-0 up,” he said.

“But Palace showed great spirit to come back into it,”

Palace’s fightback typified their own recovery under Coach Tony Pulis this season.

Seemingly headed for relegation with just one win in their first 12 games when he took over in November, they will finish in a comfortable mid-table spot.

“At halftime I really believed if we could keep it tight for 10 minutes then we could get back in the game but we didn’t manage that,” Pulis said.

“Liverpool are a team you can score goals against but they will always back themselves to score more than you so I always felt we would score. The first goal knocked them back a bit and our supporters were just amazing and they played their part.”