Penguins shut out Rangers in Game 3 of series

Penguins shut out Rangers in Game 3 of series 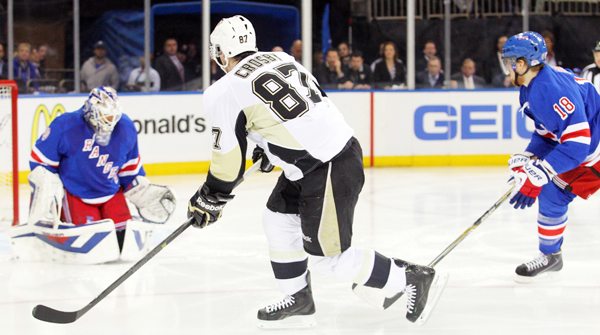 Pittsburgh Penguins center Sidney Crosby (87) scores a goal against the New York Rangers during the second round of the 2014 Stanley Cup Playoffs at Madison Square Garden on Monday. [USA TODAY/NEWS1]

Sidney Crosby scored his first goal. Marc-Andre Fleury posted his second straight shutout. The New York Rangers’ power play is still proving to be nothing more than a problem for the Broadway Blueshirts.

So it is no surprise the Pittsburgh Penguins have taken control of an Eastern Conference semifinal that suddenly seems one-sided.

Crosby snapped a 13-game playoff goal drought in breaking a second-period scoreless tie, Jussi Jokinen added a goal, and Fleury turned aside 35 shots in a 2-0 victory in Game 3 on Monday night.

“The main thing is that you get chances and that you are out there creating things, making it tough on them,’’ Crosby said. “That’s the first step. Eventually you trust that it will go in.’’

Coupled with Fleury’s 22 saves in a 3-0 victory one night earlier in Pittsburgh, the Penguins have reclaimed home-ice advantage and lead the best-of-seven series 2-1.

Fleury has 51 career postseason wins and a team-record eight shutouts.

“I don’t think there was any question he was the best player on the ice,’’ Penguins Coach Dan Bylsma said.

It is the first time the Rangers have been shut out in consecutive playoff games since the 1937 Stanley Cup finals against Detroit.

New York’s futile power play had already slowed down the offense, but now the Rangers can’t score at all. They were 0 for 5 with the advantage Monday, pushing their streak to 34 failed opportunities.

“You might be frustrated right now, but it does no good,’’ Rangers forward Brad Richards said. ‘’We are in the middle of a series, and out of those three games, we played two real good ones.’’ The Rangers haven’t scored since winning the opener in overtime. Game 4 is Wednesday in New York.

Henrik Lundqvist made 13 saves for the Rangers, who played for the fifth time in seven days. They have consecutive losses in these playoffs for the first time.

New York had 2:15 remaining on a four-minute power play that began in the first, but couldn’t cash in.