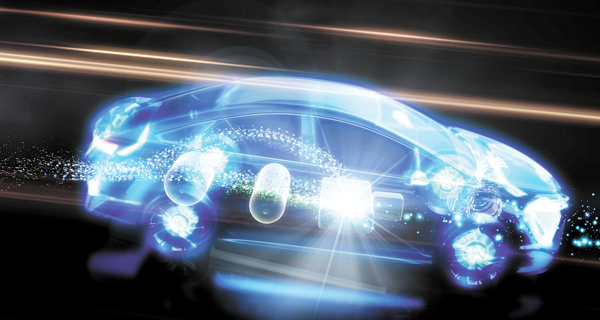 A computer-generated image of a hydrogen-powered fuel cell electric vehicle, which emits only water. Provided by Toyota

About an hour’s drive from Seoul, alongside Mount Beophwa in Mabuk-dong, there are a string of buildings whose names all begin with “Hyundai.” From here, various affiliates of Hyundai Motor Group run their centers for human resource development and R&D.

Among the buildings is the Hyundai-Kia Eco-Technology Research Institute. Many people think Namyang R&D Center in Hwaseong, Gyeonggi, is Hyundai Motor Group’s “brain,” but for developing environmentally friendly technology, such as fuel cell electric vehicles (FCEV), this institute is Hyundai’s home base.

The R&D center, which opened in 2005, conducts research for almost any eco-friendly technology system, including parts. Its research in recent years has culminated in creation of the hydrogen-powered Tucson ix fuel cell electric vehicle.

The FCEV uses a “stack” of cells that electro-chemically combine hydrogen with oxygen to generate electricity and propel the car. Its only emission is water, which also can be recycled.

“This institute is the heart and the center of Korea’s research in environmentally friendly cars,” says Kwak Jin, Hyundai Motor’s vice president for domestic sales. “We have been investing and researching a lot to innovate environmental technology.”

Researchers here are now busier than ever after Hyundai Motor Group Chairman Chung Mong-koo said in the company’s 2014 sustainability report that he will push the automaker to become a leader in the environmentally-friendly car market.

Hyundai is officially making the change to “go green,” but doubts remain over whether its plan will pay off. 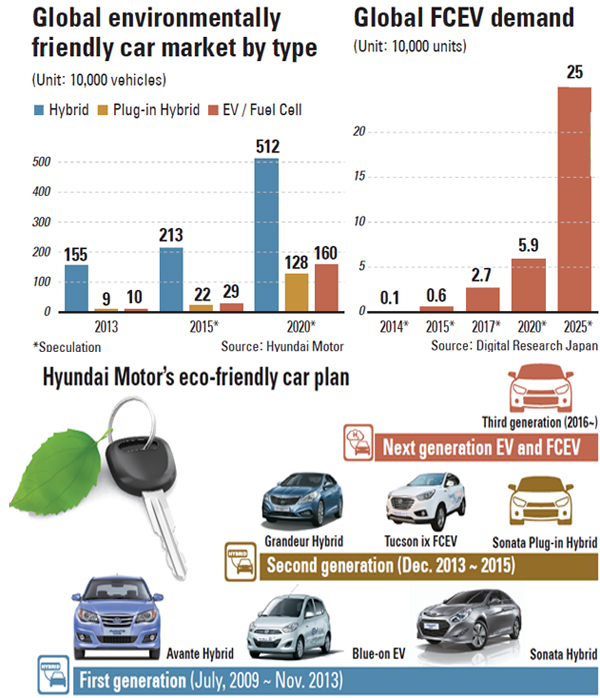 Globally, Hyundai is considered a latecomer to the environmentally friendly car market. While Toyota surprised its competitors in 1997 with the Prius, the first commercially successful gasoline-electric hybrid, Hyundai did not debut an eco-friendly car until 2009.

“Hyundai was late in preparing environmentally friendly cars because the company was still busy researching combustion engines to catch up to other automakers,” says Kim Pil-soo, an automotive engineering professor at Daelim University College. “Hyundai thought it could easily catch up to hybrid and EV technologies, but in reality it wasn’t.”

According to data from Hyundai, a total of 1.74 million eco-friendly cars were sold last year worldwide, of which 1.55 million units were hybrid electric vehicles (HEV) that combine a conventional internal combustion engine with an electric propulsion system.

Toyota was the leader with 68 percent of market share, followed by its Japanese rival Honda with 10 percent. Hyundai and Kia combined made up only 4 percent.

Hyundai predicts 8 million units will be sold in 2020, but HEVdemand will decline. Instead, the company expects demand to rise for plug-in hybrid electric vehicles (PHEVs), a hybrid with a rechargeable battery and an external electric power source, all-electric vehicles (EVs) and FCEVs.

“The company will not make money from FCEVs over the next 20 or 30 years,” says Kim. “The question is can Hyundai stay competitive until the FCEV era comes?”

Japan, where Hyundai quit selling cars in 2009 due to low sales, currently accounts for half of world’s green car sales. But by 2020, Hyundai expects the United States to become the top buyer with 33 percent of the market, followed by China with 22 percent.

“Japan has dominated the environmentally friendly car market thanks to government subsidies and their technology in the auto industry,” says Lee. “But it looks hopeful that other markets are growing, and this gives us an opportunity to take over and lead the market.”

Lee said Hyundai’s master plan is to complete a full line-up of eco-friendly cars by 2018 and become the global leader after 2020.

Hyundai already has made hybrid versions of the Sonata midsize sedan and Grandeur (called the Azera overseas) premium sedan, and the Tucson ix35 FCEV is the most recent addition. Last year in Ulsan, the Tucson ix35 became the first FCEV to be mass-produced.

In addition, the automaker plans to release a Sonata PHEV next year and add an EV model in 2016. The compact EV will feature an 80 kilowatt motor and a 27 kilowatt-hour lithium-ion battery. It can be driven 200 kilometers (124 miles) on a full charge, according to Hyundai.

It will be Hyundai’s second fully electric vehicle. The company developed the BlueOn EV in 2010 based on the European model i10, but it did not sell well.

Hyundai acknowledges it has been the underdog in developing all-electric vehicles, but its small affiliate Kia Motors has shown advanced EV technologies in its Soul EV, meaning Hyundai’s new cars will be different.

Hyundai is preparing multiple types of eco-friendly vehicles because it can’t predict how consumers in different countries will react to each green vehicle.

To create its full line of eco cars, Hyundai is establishing a platform to share parts and enhance the capacity of each environmentally friendly car with a minimum of investment.

“A motor, inverter and battery are three common parts that go into any kind of environmentally friendly car, so having competitive technology in these three areas is key.” Lee says. “Although we don’t make the battery, we partnered with LG Chem, which has the world’s best technology, and we can benefit from each other as the market grows.”

Hyundai’s all-electric vehicle line will consist of small and compact cars, while HEVs or PHEVs can be midsize sedans. Because of the size of FCEV hydrogen tanks and fuel cells, along with the high cost, the automaker will use them in large sedans, SUVs and buses.

Hyundai has long been a believer in FCEVs. The company has been developing its FCEV since 1998 and signed a sales contract with European countries after setting up the world’s first mass-production line for FECVs.

According to Hyundai, the top advantage of an FCEV is an abundance of easily accessible hydrogen. The company claims that 100,000 tons of hydrogen is enough to operate 500,000 FCEVs. Korea can produce 1.3 million tons in a year and about 38 million tons are produced globally.

Besides Hyundai, Toyota, Honda and Mercedes-Benz also are developing FCEVs. Nissan, BMW and Ford are keen on creating all-electric vehicles or hybrids.

Critics like Tesla Motors’ Elon Musk have said that hydrogen is not suitable for use in cars because it is a dangerous gas, but Hyundai claims that safety will be one of its top priorities.

“We have gone through at least 14 tests on hydrogen tanks, including shooting guns at it, dropping the car and setting it on fire,” says Lee.

FCEV supporters claim that FCEVs are more convenient for drivers than normal EVs. For instance, Hyundai’s third-generation Tucson ix FCEV can has a range of 415 kilometers on a full charge, nearly for times farther than a typical EV, and it takes thee to five minutes to fill the hydrogen tanks, much quicker than recharging an electric car’s battery

Citing Japan’s Digital Research, Hyundai said FCEVs will be more common next year when automakers like Toyota and Honda release their models. However, Hyundai said the commercial market is not expected to open up until 2020 and will reach 250,000 units by 2025.

Industry observers say FCEV success depends on whether automakers can reduce the price of the product in a short period of time.

Hyundai says its Tucson ix FCEV costs 150 million won ($144,600). Even with a government subsidy of 60 million won, it is expensive for the average customer. But the company believes the price of its FCEV can fall to only about 10 percent more than a diesel car as FCEV technology develops.

Hyundai is looking to make its FCEV cheaper by localizing parts. The automaker said 95 percent of its Tucson ix FCEV is made from locally supplied parts from 200 companies, but important parts like the membrane electrode assembly are imported.

“We are working to localize membrane electrode assembly and other core parts,” says Lee. “Also, sharing parts with other types of eco-friendly cars will help reduce the price once we set up the platform.”

Advancments in fuel cell technology also is important for lowering the price, but it seems one of Hyundai’s Japanese rivals is fighting hard in that department.

Honda is the frontrunner after releasing the FCX, the world’s first fuel-cell vehicle, in the United States and Japan in 2002.

Honda said its next generation FCEV, which will be released in 2015, will feature the world’s first application of a fuel-cell powertrain packaged entirely in the engine of the vehicle, allowing for more cabin space and flexibility in the potential application of fuel cell technology to other vehicles in the future.

Toyota says that with nanotechnology and design improvements, its FCEV for 2015 has a smaller cell stack than competitors, so it takes less fuel to go farther. The company claims its FCEV has a range of 700 kilometers, nearly 300 kilometers farther than Hyundai’s Tucson ix FCEV.

Toyota also is trying to reduce the cost of the car by using fewer platinum catalysts, allowing the car to combine oxygen and hydrogen more effectively to generate more electricity.

According to Reuters, Toyota’s new FCEV will use about 30 grams of platinum in the fuel-cell, which is 40 grams less than Hyundai’s Tucson ix FCEV. Platinum currently costs more than $1,400 an ounce (28 grams) in the global market.

“Using less platinum will reduce the cost, but at the same time, the durability weakens,” says Im Se-Joon, Hyundai’s senior research engineer for its fuel cell vehicle team. “We can reduce the use of platinum by 20 grams, but what’s important is to how to maximize the surface area of the platinum used in the fuel cell.”

Hyundai said it is also testing other alloys and non-platinum catalysts as possible replacements for platinum. But the company is not concerned that platinum deposits are extremely limited in the world, saying it can gather and recycle 98 percent of the platinum used in the fuel cell.

But cutting prices and providing high quality vehicles are not the only components to creating robust demand for FCEVs.

Renault-Nissan Alliance Chairman Carlos Ghosn, who leads world’s fourth-largest automotive group, pointed out during his visit to Korea last month that the einfrastructure is not ready for FCEVs.

But Hyundai hopes the government will help.

In Korea, there are only 11 hydrogen charging stations, with two more to be added this year. The Ministry of Environment said it will build 10 more stations by 2020 and have a total of 200 by 2025.

Ahn Byung-Ki, Hyundai’s Fuel Cell Group director, says that considering the size of Korea and the fact the population is concentrated in metropolitan areas, the country doesn’t need a huge number of hydrogen stations for FCEVs to become popular. Still, the more the better.

He predicts 30 to 40 hydrogen charging stations would be needed to serve 5,000 FCEVs.

“It is true that a hydrogen charging station requires lots of money to set up, 2 billion won to 3 billion won,” says Ahn. “But once the station is built, it can accommodate more cars than EVs since its charging time is faster.”