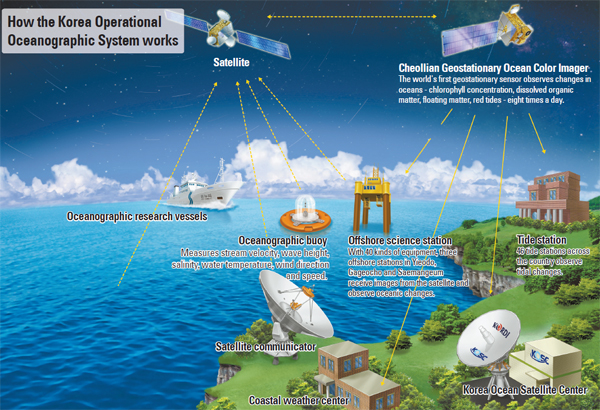 ANSAN - Early in the morning of April 28, 12 days after the Sewol ferry capsized in waters southwest of the peninsula, the country’s top marine weather researchers were staring intently at red dots that indicated the speed of tidal currents in the area of the accident.

“The currents will flow at the slowest pace at around 2 a.m. on the 29th and at the fastest at 6 p.m.,” said Park Kwang-soon, a senior researcher at the Korea Institute of Ocean Science and Technology (Kiost).

This piece of information was immediately sent to the government’s rescue teams to help with their operations.

The red dots forming a sharp V-shaped line graph on a screen on the wall at the Korea Operational Oceanographic System headquarters, or KOOS, show the predicted speed of currents and improve the search team’s chances of finding the missing bodies of Sewol passengers.

Like weather broadcasters telling viewers the forecast for the day, the KOOS reports daily marine weather for experts in various fields. After the Sewol sinking, TV news channels started broadcasting changes in marine weather off Jindo County where the ferry sank. 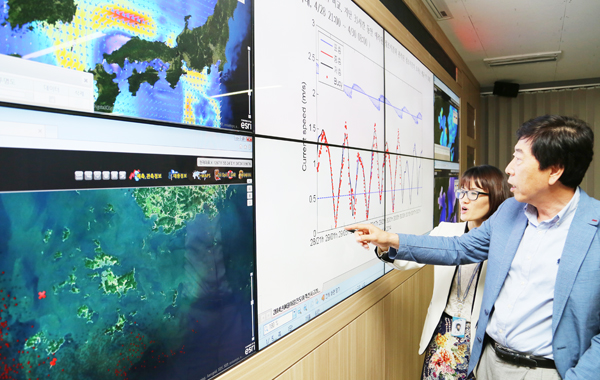 Researchers at the Korea Institute of Ocean Science and Technology in Ansan look at a graph showing water speed where the Sewol ferry sank. Provided by the institute

KOOS’ data is measured by a weather observation buoy floating in the sea about one kilometer south of the sunken ferry. KOOS analyzes raw data it receives from the buoy and uses it to predict changes in marine weather.

After completing its five-year research phase last year, the KOOS was put into use last July.

The country was in desperate need of such a system in December 2007 when an oil spill was caused by a collision between Hong Kong-registered crude oil carrier Hebei Spirit and a Samsung Heavy Industries crane barge off Chungcheong. The spill reached as far as Jeju Island.

The KOOS is comprised of three parts: a real-time ocean observation system, a numerical oceanographic modeling system and an application system.

The numerical oceanographic modeling system plays a key role in forecasting through its careful calculation of data obtained from buoys and scientific stations in the territorial sea. The system is capable of projecting the impact of an oil spill.

“By forecasting the strength of tidal currents, ocean currents, waves, wind directions and speed, we can foresee how spilled oil would flow at a certain time and help the government establish measures to contain further expansion,” Park said.

The government invested $9.74 million in KOOS’ first research period. The system has only been active for 10 months, but it has proved itself useful for small and big accidents.

An important facilitator of the KOOS is the Geostationary Ocean Color Imager (GOCI), a sensor that functions like the camera installed in Korea’s first meteorological satellite, Cheollian, launched in June 2010. Eight times a day, the GOCI observes areas around the Korean Peninsula of up to 2,500 square kilometers (about 617,000 acres) and sends 500-square-meter pictures to the Kiost’s Korea Ocean Satellite Center in Ansan, Gyeonggi. It can also take pictures of the sea off China, Japan, Taiwan and Russia. Kiost shares the GOCI images with NASA and its counterparts in Europe.

The GOCI is the world’s first oceanographic sensor that detect changes in oceans and floating matters in eight color bands. It was co-developed by Kiost and Paris-based Astrium, an Airbus Group company.

“In this image taken by the GOCI, you can see this murky spot in the southwestern sea off the peninsula, which is exactly the accident site of the Sewol ferry,” said Park Young-je, director of the satellite center, displaying the picture on a screen. “The murkiness indicates that tidal currents are fast in this particular area.”

In the second six-year phase of research on the KOOS, workers want to improve the system’s accuracy.

Researchers are seeking to increase the KOOS’ range from the seas around the Korean Peninsula into the northwestern Pacific Ocean to better predict ocean circulation patterns.

“The weather forecasting information can be used to minimize the damage caused by accidents in the sea by helping the government, industries and individuals become aware of weather conditions,” a Kiost researcher said. “It can be used in fields as various as fishing, military operation, environmental contamination, port management and resource development.”

The institute is also upgrading the GOCI so that it can take ocean images farther south.

“We are currently developing a second version of GOCI that is capable of photographing a wider range of areas as far as Indonesia and Malaysia by 2018,” the director said. “In the future, if the GOCI can photograph the whole Earth, Korea will make a significant contribution to global efforts to combat climate change.”