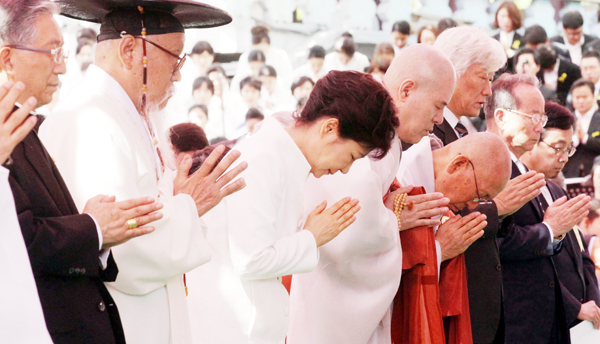 President Park Geun-hye admitted “infinite responsibility” for the tragic sinking of the passenger ferry that claimed hundreds of teenagers’ lives and pledged to make all-out efforts to prevent future disasters.

It was the first time Park said she was directly responsible for a crisis in the country since her inauguration in February 2013.

“I feel infinite responsibility for all, from the beginning of the accident to wrapping up the case,” she said Sunday during her second visit to Jindo County, where relatives of 35 missing ferry passengers continue to wait for their remains to be recovered.

Park promised the relatives, officials and divers working on recovering bodies from the sunken vessel, “If you tell me things that really troubled you while you were here, I will take measures [following up on the issue] as soon as possible.”

According to the Korea Coast Guard, the death toll reached 267 passengers as of yesterday evening, with divers retrieving 39 bodies from the sunken ferry over the weekend and on the holidays Monday and Tuesday.

Although in the past Park has criticized organizations and ministers, she has never accepted personal responsibility for the national scandals that have occurred since she took office more than a year ago, including two involving the National Intelligence Service, revelations of an online smear campaign against her opponent in the 2012 presidential campaign, manipulation of evidence in an espionage case, the faulty restoration of Sungnyemun Gate and the massive leaks of personal information of customers from major banks and credit card companies.

Later in the day at a celebration of Buddha’s birthday at Jogye Temple in central Seoul, Park repeated her apology. It was the first time a sitting president attended a ceremony to mark Buddha’s birthday.

“I feel sorry and heavyhearted,” she said. “As the president who has to protect the lives of the people, I don’t know what words to use to express my condolences to the families who lost the students and all the others.

“I will fundamentally change the national system and policies to protect the safety and the lives of the people so that the sacrifice [of the ferry casualties] will not be in vain,” she said. “I am looking for the best way to fix wrong customs, corruption between the public and private sectors, and other problems in the civil service sector to root out corruption and bribery and build a righteous and clean government.”

Widespread and deep-rooted corruption ties between government officials and the private sector are universally blamed for the disaster. Oversight of private industries is usually left to former bureaucrats parachuted in to state-run companies.

The nexus between the bureaucracy and local businesses is blamed for many ills of Korean life such as lax safety concerns on ferries or even in the nuclear power sector.

According to a poll jointly conducted by the JoongAng Ilbo and Gallup Korea surveying 800 adults, 54.7 percent of respondents in Seoul, Incheon and Gyeonggi said Park’s image was damaged by the sinking. However, her approval rating showed little change, compared with the previous poll on March 3. In Seoul, Incheon and Gyeonggi, 50.4 percent of the respondents still supported her, decreasing only 0.6 percentage point from the March poll. The Sewol sunk on April 16.