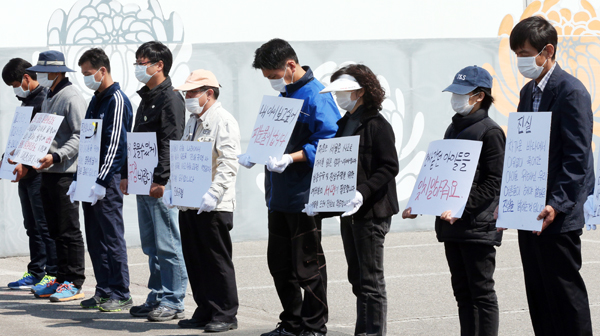 Relatives of the victims of the Sewol sinking stage a silent protest at the joint mourning altar in Ansan, Gyeonggi, holding posters calling for a special probe into the tragedy. [NEWS1]

A diver working for a private contractor died while searching for remains of victims of the Sewol sinking yesterday morning, extending the tragedy to the recovery team.

Lee Kwang-ok, 53, jumped into the waters 11 miles off Paengmok Harbor in Jindo, South Jeolla, at 6:05 a.m. yesterday to connect a guideline to the sunken ferry from a barge above. About five minutes into his dive, there was no response in communications between Lee and rescue workers on the barge. A rescue worker pulled up Lee, who was unconsciousness, from a depth of 25 meters (82 feet) and attempted CPR.

According to Yonhap News Agency, an oxygen line to Lee’s helmet became tangled with guidelines between the sunken Sewol and the barges above.

It is suspected that Lee lost consciousness while trying to untangle the ropes. The possibility that the oxygen line malfunctioned has not been ruled out.

With no sign of breath, Lee was taken to Hankook Hospital in Mokpo, South Jeolla, and was pronounced dead at around 7:30 a.m. He brought the confirmed death toll in the accident, the worst maritime disaster in Korea’s history, to 268. 35 more passengers on the ferry are still missing.

Lee, a veteran with 30 years of experience as a diver, was on contract with Undine Marine Industries, a private company that specializes in offshore and subsea engineering as well as maritime rescue and salvage.

Lee was assigned to the dive only a day after he arrived at Paengmok Harbor, raising suspicions that the joint rescue team pulled together by the military, the Coast Guard and Undine is sending divers into the waters without proper preparations.

The fact that Lee dove alone instead of going down with a partner also raised questions about safety management at the rescue site.

Lee’s death was the first casualty for the joint rescue team in a three-week search and rescue operation for the ferry Sewol, which capsized in waters off the southwestern coast on April 16. Of the 476 passengers aboard, only 174 were rescued, all on the first day of the sinking.

The waters where the ferry sunk are known for their strong currents, high waves and stiff winds. After 20 days of searching, concern has grown over the health of the divers. An increasing number of divers have experienced exhaustion and decompression sickness.

Lee was one of the 13 divers newly contracted by Undine to relieve the workload of its divers on the scene.

Despite Lee’s death, the rescue team resumed operations later in the day. From today through Friday, currents in the area will be weaker than normal.

Meanwhile, the emergency countermeasure headquarters increased their attempts to prevent the loss of any human remains by setting up sea nets as far as 15 kilometers away from the sunken ship.

Families still waiting for the remains of their missing loved ones say the action came too late. They say it took four days for the authorities to have civilian fishing boats comb the sea with dragnets after the April 16 sinking.

“Bodies could have been lost in the first few days [of the sinking] because of strong underwater currents,” said the father of a Danwon High School student still missing in an interview with the JoongAng Ilbo. “The nets installed belatedly will not prevent the loss [of remains that already drifted away].”

Dissatisfaction among families over the government’s handling of the crisis led 10 relatives to stage a silent protest at the joint mourning altar in Ansan, Gyeonggi, for the fourth day in a row yesterday. Wearing white mouth masks, the family members held placards calling for a special investigation of the accident and the initial government response.