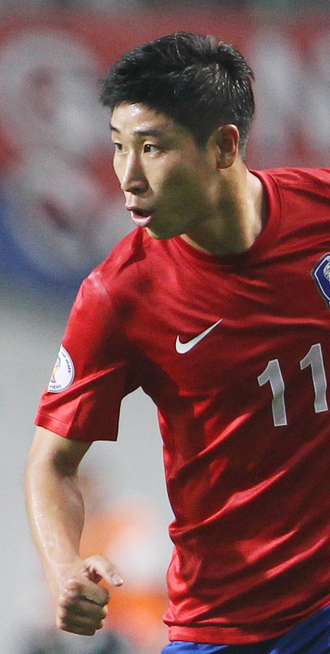 In the 2010 South Africa World Cup, Korea, led by Coach Huh Jung-moo, made the top 16 for the first time in another country, but the milestone meant nothing to forward Lee Keun-ho, who was left off the roster.

Lee, who plays for the military football club Sangju Sangmu Phoenix, was 25 at the time. He was considered a rising star on the Taegeuk Warriors and one of Huh’s favorite attacking options. In the Asian qualifying rounds, he led Korea’s offense with three goals, and most analysts and fans saw Lee as a valuable asset to the World Cup team along with other forwards and midfielders such as Park Ji-sung, who played for Manchester United at the time, and Lee Chung-yong of the Bolton Wanderers.

Lee was called up by Huh for the national team’s training in Austria, but he soon flew back to Korea after his name wasn’t included on Huh’s final roster.

Ahead of the South Africa World Cup, Lee struggled to recover from an injury he sustained even though it wasn’t serious, and people were surprised when Huh chose not to bring one of his favorite players to the world’s biggest football event.

Lee has been trying hard to impress the current national team coach, Hong Myung-bo, who he hopes will call his name when he announces the final roster for the 2014 World Cup in Brazil, which kicks off in June, at the Paju National Football Training Center at 11 a.m. today.

“I’m 29 now and I think this could be my last chance to play in the World Cup,” Lee said. “As many people know, I always dreamed of representing my country in the world’s biggest football event and I was so close to accomplishing that dream four years ago, which wasn’t eventually realized, though I think that history has made me more desperate [to play in Brazil].”

Lee has brought himself to a higher level of football since the last World Cup. He was named the 2012 player of the year by the Asia Football Confederation and received the Most Valuable Player award and was the leading scorer of the K-League Challenge with nine goals with four assists last season.

This year, the veteran footballer is optimistic. He was called up by Hong for team training in Brazil and the United States in January and also played in this year’s international friendlies against Costa Rica, Mexico, the United States and Greece. After those matches, Hong said he had already decided on 90 percent of the roster.

Lee’s best skill is that he can basically play in every attacking position. For the Phoenix, he has generally played as a striker but he has played as either a winger or central attacking midfielder for the national team.

Lee recently recovered from a right knee injury he sustained in a friendly match against Greece in March, but has only scored one goal in seven K-League Classic matches this season.

“I’m pretty sure that the injury will not be a problem,” Lee said. “I have been doing my best to be a part of the upcoming World Cup, and I think I’m ready to play for my country.”