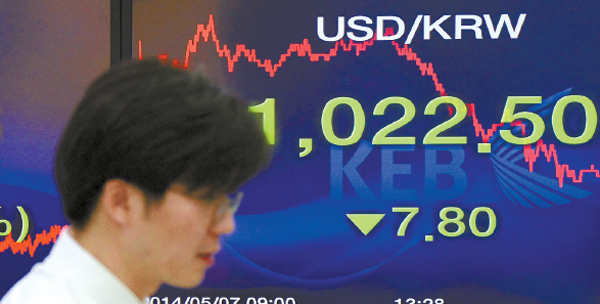 An electronic board at the Korea Exchange Bank in central Seoul yesterday shows the local currency appreciating to its highest level in nearly six years at 1,022.5 won (0.99 dollars) against the greenback. [NEWS1]

Exporters’ fears of an ever-strengthening won have turned into a never-ending nightmare as the local currency strengthened to the 1,020 won-to-the-U.S. dollar level, the strongest in nearly six years.

Analysts are saying the won’s current momentum is likely to continue for the time being. The Korean authorities have no plans of intervening in the market anytime soon.

Even large conglomerates like Samsung Electronics and Hyundai Motor, which have been hedging against exchange-rate volatility particularly since the global economic crisis in late 2008, may be caught off guard by the recent won appreciation.

The won yesterday closed at 1,022.5 won, or $0.99, against the greenback. It not only further appreciated from Friday’s close of 1,030.3 won but was the strongest level in nearly six years.

The moment the market opened for the first time this week, the won dropped to the 1,020 level. The foreign exchange market and the stock exchanges were closed on Monday and Tuesday to celebrate back-to-back national holidays, Children’s Day and Buddha’s Birthday.

There are growing concerns over whether it will further appreciate to the 1,010 won level.

Many market analysts say the chances are likely.

“The won’s appreciation is resulting from the continuing weakening of the U.S. dollar, which started since the beginning of the year,” said Lee Chul-hee, a researcher at Tong Yang Securities.

A disappointing outlook for the U.S. economic recovery was the factor that drove the dollar to depreciate and forced investors to flock to emerging markets including Korea, which is already awash with dollars thanks to its trade and current account surpluses of the last two years.

In the first quarter, the U.S. economy expanded at a meager 0.1 percent year-on-year. This was lower than the 1.2 percent growth forecast. U.S. officials cited the exceptionally cold weather earlier this year.

Although the won has been appreciating at a rate that many exporters bite their nails over, the authorities are reluctant to intervene.

When the central bank Governor Lee Ju-yeol was asked about the appreciating won during a meeting with reporters in Kazakhstan on Saturday, Lee refused to comment.

“[The currency] was one question I wanted to avoid,” Lee said, who was attending the annual Asia Development Bank meeting. “[Foreign investments] that withdrew due to jitters over [U.S.] quantitative easing tapering [last year] have returned; [Korea’s] current account balance is continuing to post surpluses and global economic uncertainties are easing. What more can I say?”

The monetary policy committee of the central bank will likely hold the benchmark borrowing rate at 2.5 percent at its monthly meeting, which is to be held today.

Meanwhile, many major exporters including Hyundai Motor Group have business plans for this year assuming the won will be traded around the 1,050 won level.