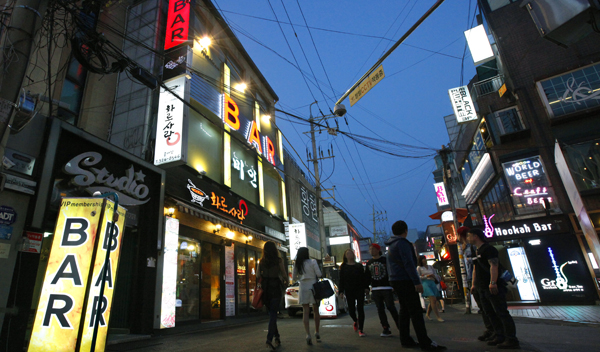 Although a popular nightlife district for travelers and expats, Hongdae in western Seoul, above, is one of several areas in the city that has bars that ban foreigners. By Park Sang-moon

For 25-year-old Indian-American Chetan Narain, visiting Korea meant experiencing a new culture and getting a firsthand look at K-pop, his newfound obsession.

On a Thursday night in Itaewon, Narain finished up his drinks at a local bar and asked the bartender if there were any good nightclubs around the neighborhood.

The bartender suggested one a few minutes away, and Narain made his way there. But when he arrived, his night out was cut short.

“The bouncer said to me, ‘I’m sorry, I don’t think you meet our dress code,’?” Narain said.

Narain was puzzled. He was wearing a gray hoodie and slacks - nothing unusual. In fact, as soon as Narain asked what was wrong with his outfit, a Korean man wearing the same clothes walked out of the club. It became clear that the dress code wasn’t the issue, said Narain, who spent time quizzing the bouncer, “to understand what the problem was.”

Narain eventually left, but a few days later in Hongdae, he was faced with a similar hostility, a chalkboard in front of another bar that read: “No foreigners, sorry. This place is only for Koreans.”

“I think the first time was more surprising. The second time was interesting because there was an established rule; that’s just the way things are,” Narain said.

To better understand how these bans are enforced, two Korea JoongAng Daily female reporters, a Korean-Australian and a Russian-American, visited several venues to determine whether certain establishments deny entry to foreign customers.

The first stop was the bar in Hongdae that Narain visited. Although the chalkboard sign still indicated that the venue was for “Koreans only,” the two reporters walked right in. But soon enough, the owner of the unlimited-refill cocktail joint was quick to ask, “Do you have any more foreigner friends coming?”

He went on to explain, “We have a policy that we don’t let foreigners in, but in this case we can make an exception,” he said, adding, “but please tell your friend that she can’t come back with her foreigner friends.”

The owner said he put up the sign because his bar was being overtaken by foreigners. He said it was difficult for him to interact with non-Korean customers because he couldn’t speak English and added that Korean patrons don’t enjoy a multicultural vibe. “You know, the drinking cultures of Koreans and non-Koreans are too different. They don’t mesh well together,” he said.

Just a few months ago, the bar was a popular haunt for foreigners because of its cocktail deals and kitschy, themed decor, which is modeled to look like a pharmacy.

The second stop was a Western-style chain bar that is popular with the younger crowd.

The franchise in Gangnam is known among expats for discriminating against foreigners. In fact, just standing near the venue prompted a patron to stop and say, “Hey, if you guys can’t get in, you can always try across the road.”

Although there is no obvious sign denoting “Koreans only,” this bar is a lot craftier, using multiple notices to indicate that entry will only be allowed with an “ID with a copy of your fingerprint.” All national Korean resident cards have a fingerprint on the back, but fingerprinted ID cards are not issued to foreigners.

The first trial was taken on by two white females. The pair was immediately turned away. The second try was attempted by the ethnically Korean reporter. At first, she was let in with a bank card as a double measure instead of the ID. But when she tried to re-enter with her two friends, all three were denied access.

This seemed to be a recurring event, as the next two male foreigners who tried to walk in were also turned away.

Aziz and Abdul, who only gave their first names, said that while on vacation from the United Arab Emirates they had already been denied entry at two spots in Gangnam, including the franchise Western-style bar.

“We told them that we just wanted to go in to check it out, and they said we needed an ID with a fingerprint,” explained Abdul, who said to the door staff that they’d come back with their passports if they liked the bar. “But they just kept saying, ‘Korean ID, Korean ID,” Abdul said, and the two were shooed away.

The fingerprint verification, the manager told the Korean reporter, is “just another way of turning foreigners away.

“It is discrimination,” admitted the manager, who said the ban came into effect after “too many incidents of rowdy foreigners who start fights and sexually harass women.”

Part of the reason the bar is cautious is because “foreigners won’t be punished by local law,” the owner said.

While insisting on seeing a “Korean ID with a fingerprint copy” seems to be an extreme way of filtering customers, some bars deny entry according to the situation. A lounge bar near the Western-style establishment where Abdul and Aziz were denied entry has no problem letting female foreigners in.

And a YouTube video posted in September 2012 shows an incident where a Korean woman at the door denies entry to several English speakers at an Itaewon club because they didn’t have “Korean membership.” When they inquired if they can get this membership, the woman simply repeats again, “Only Korean membership.”

However, a separate report by the National Police Agency in 2012 shows that the crime rate for non-Korean residents was 1.9 percent, compared with 3.7 percent for Koreans.

The crime rate for non-Koreans remains lower than the rate for Korean residents. Yet high-profile crimes committed by foreigners stay in the minds of Koreans. Cases such as the 1997 Itaewon murder of a 22-year-old Korean student in a Burger King bathroom serve as an example of foreigners who sometimes avoid persecution by Korean law. 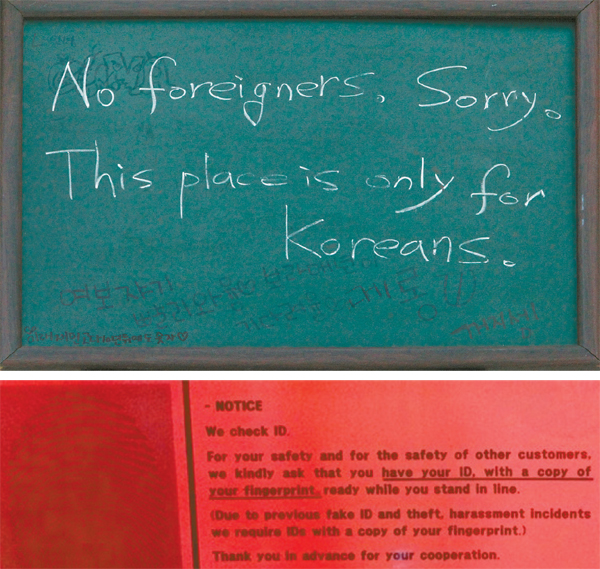 Top: A sign placed at the entrance of a bar in Hongdae shows that foreigners are not welcome. “You know, the drinking culture of Koreans and non-Koreans are too different,” the bar’s owner told a Korea JoongAng Daily reporter. “They don’t mesh well together.” Bottom: The fingerprint ID as requested by the Gangnam bar is only available to Korean nationals. The establishment is notorious for not allowing entry to foreigners.

The Gangnam bar manager said he extended the ban to include not only male non-Koreans but foreign women as well, to be “fair.”

When asked if he thought the ban went against human rights, he responded, “We did take it up with the human rights commission, and we won.” But the Human Rights Commission of Korea, an advocacy group focused on protecting human rights, said they have no record of such a petition.

The commission investigates discrimination cases in Korea if it receives a complaint.

One case in 2011 involved a naturalized Korean citizen from Uzbekistan who was denied entry into a bathhouse, or jjimjilbang, in Busan. The owner of the sauna said that some foreigners were sex workers, and that the woman from Uzbekistan might have AIDS. The woman informed the Migrant Labor Welfare Center in South Gyeongsang, which in turn told the Korean human rights organization about it. The organization corrected the situation by advising the owner that such a prohibition is a violation of human rights.

The commission’s human rights declaration, which is recognized under the Korean Constitution, prohibits anyone from discriminating against gender, religion, disability, age, position in society, place of birth and race.

However, by Korean law, the group has no legal right to charge the establishment. It can only give advice to the business and follow up to discuss the issue with the owner. That is about the extent of the organization’s reach, as the case of the Western-style bar illustrates.

“We don’t have any authority to enforce anything, we just relay the information to the right legal body; we are just here to give advice,” said commission case manager Yoo Hee-seung.

Yoo said that cases of forbidden entry to drinking venues are a relatively new phenomenon and that the commission, for the most part, is better prepared for practices like helping imprisoned foreigners who may feel as if they’re being mistreated on the basis of race.

“It’s true that we can’t really fine them or impose any penalty,” said Yoo.

But she said that this method worked effectively to help eradicate discrimination in 80 percent to 90 percent of the cases.

In fact, the legal community, the organizations and the business owners who talked to the Korea JoongAng Daily all had different interpretations of discrimination law, with many dodging the questions they were asked.

Across the board, civilians and law insiders, as well as government bureaus, are unsure about how to deal with the issue. Various stakeholders who refused to comment, or professed to “not really know about the issue,” highlighted this fact.

One human rights lawyer hung up on one of the reporters, while others were “unable to comment.” One source from a legal aid group, who wished to remain anonymous, said that “it wasn’t exactly illegal, because discrimination is difficult to ascertain.”

Meanwhile an employee from the Government Call Center said that banning foreigners from a bar was a murky area that could “go either way, really.

“It does sound like a violation of equal rights, but it’s tricky because it’s a private business,” they said. The operator added that it would be problematic if a government-run organization was enforcing such rules, but as it is a private business it could fly under the radar.

As Narain found out, these exclusions from hip spots around town send out mixed messages about a nation that received over 12 million visitors last year. Despite the promotions the Korean government organizes annually to put Korea on the map, these bans point out that perhaps change is coming too quickly while the stereotypes applied to foreigners remain the same.

As it stands, foreigners living in Korea now make up about 3 percent of the population, or more than 1.5 million residents. While change can’t come quickly enough for those on the receiving end of discrimination, for the most part, foreigner bans at nightclubs are not exactly high up on the agenda for human-rights activist groups.

Yoo said that although there is still some way to go to strengthen human rights, she feels Korea has come a long way. “I remember when I was young, they used to have a color of crayon called skin color,” she said.

“I just took it for granted and didn’t question it. Now they don’t have that, and so change is coming slowly,” she said. “I know that Korea is not so kind to immigrants and a lot more needs to happen to develop human rights.”