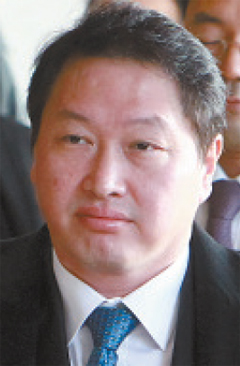 SK Group Chairman Chey Tae-won has decided to give more than 30 billion won ($29 million) that he received from the conglomerate’s affiliates last year back to society, according to a group official.

Chey has also decided not to receive a retirement allowance from four listed companies - SK C&C, SK Innovation, SK Corporation and SK Hynix - following his resignation from the director position at those companies.

“Chairman Chey has decided to return all of his pay from affiliates last year [30.1 billion won] for social activity purposes,” an SK official said.

Criticism mounted against the conglomerate owner after the amount of wages given to directors who receive over 500 million won were disclosed based on the revised capital market law in March.

Although Chey was sentenced to four years in prison earlier this year for corporate crimes, he received 30.1 billion won in pay last year from the four affiliates, as well as the previous year’s bonus.