From left: Google Korea’s cafeteria offers a buffet with 40 types of food items for employees, and the company covers the expense, Hyundai Card’s cafeteria offers Johnny Rocket burgers to employees for 2,000 won and the company covers the rest of the cost, Samsung Life Insurance holds an event inviting well-known noodle restaurants to serve lunch to its employees. Provided by each company

Yoo Jeong-il, a 29-year-old office worker, considers himself a frequent user of cafeterias. Ever since he had his first meal at an elementary school, he hasn’t skipped a single lunch at the canteen - even at his current workplace.

“I could have had more meals at school and company cafeterias than those made by my mother,” Yoo said.

For many office workers like Yoo, lunch breaks are an important part of the day, when workers can release morning stress with a tasty meal.

But unlike at school or in the army, company cafeterias are not workers’ only choice for food - they can always go out to eat.

Noticing the pleasure that employees get from a good meal, many companies are offering higher-quality food as part of their worker welfare programs, hoping to foster loyalty among them and increase efficiency.

“With rising consumer prices, many employees today find it a burden to go out to eat for lunch,” said an official from a local company. “More employees instead are turning to company cafeterias. And naturally, they are demanding more quality meals.”

Although the five groups dominate the market, the quality of food and the service employees receive depends largely on each company’s business philosophy and the amount of money they’ve invested.

IT companies are among the companies focusing on the food their employees receive. Google Korea, which is headquartered in Yeoksam-dong, southern Seoul, offers a lunch buffet worth 20,000 won ($19.55) to its employees on the house. 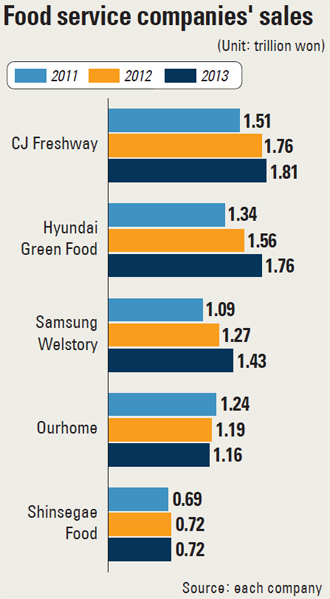 A former hotel chef is in charge of managing four types of daily meals - Korean, Chinese, Japanese and other rotating international cuisine. The catering service is run by Ourhome.

“Google Korea has requested that we provide the best quality meals,” said an official from Ourhome. “They asked us to compare meals with cafeterias at other Google offices overseas.”

With a quality canteen service, Google employees often meet up with co-workers in the cafeteria.

“Many employees are very proud of the cafeteria service,” said a Google employee. “We joke around, saying that even if we move companies we will never forget the meals.”

NHN Entertainment in Techno Valley in Pangyo, Gyeonggi, also provides employees with a similar four-lunch scenario. The company provides late-night meals for employees who work overnight or overtime. Meals such as ramen or dosirak, a type of lunch box that consists of rice and side dishes, are served from 10 p.m. to 2 a.m.

Some companies have brought popular eatery brands into the cafeteria, breaking away from the traditional idea that a meal should consist of rice, soup and three side dishes.

Hyundai Card and Hyundai Capital hired Shinsegae Food to run their meal services and after much discussion, they opened Johnny Rocket, a popular hamburger store, last August. The companies also made sure that menu prices were cheaper than what customers would pay outside of work, at 2,000 won.

“Our canteen isn’t a place for having only meals but many employees also utilize the place for short meetings,” said an official from Hyundai Card.

Samsung Welstory is organizing an event at the Samsung Life Insurance building in central Seoul to offer samples of menus from popular eateries in Hongdae, Itaewon and Garosugil to office workers. Restaurants will include Toma Tilo (Mexican) and Noodle Box (Asian noodles).

It also offers curry and naan with indica rice or long-grain rice grown in the Indochina region, as well as nato (fermented soybeans) and dosirak (lunch boxes).

But other companies are using their cafeterias for strategic purposes. E-Mart, a large discount store operated by Shinsegae Group, offers simple home food made from the store’s products to its employees at the headquarters in Seongsu-dong, eastern Seoul.

The retailer started selling packaged meals like ready-to-eat garlic steak and kimchi jjigae (stew) in September and the products have been put on lunch menus for E-mart employees.

“With more diversity in the menus we offer employees, the number of [cafeteria] users has jumped about 10 percent,” said an official from Shinsegae Food, which runs E-mart’s cafeteria.