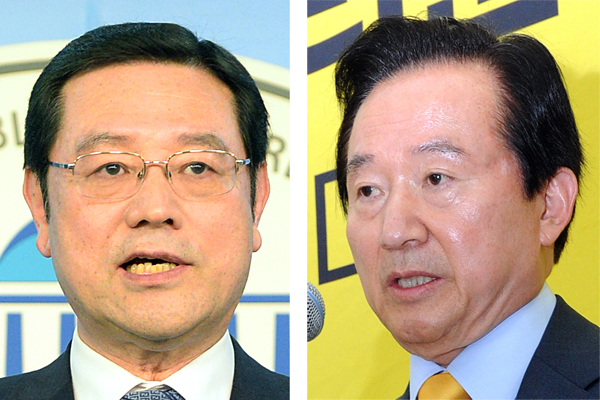 New Politics Alliance for Democracy (NPAD) Representative Lee Yong-sup made it official yesterday that he will withdraw from the main opposition party and stand as an independent in the upcoming local elections.

His announcement is an apparent protest to NPAD’s nomination Friday of eye doctor Yoon Jang-hyun as a challenger in the Gwangju mayoral race. Given that incumbent Mayor Kang Un-tae had earlier defected from the party, vowing to run as an independent, it remains to be seen whether Kang and Lee will join forces to beat Yoon, who is a new and relatively obscure candidate.

“Ahn Cheol-soo’s ‘new politics’ is dead,” Lee said yesterday at a press conference in reference to NPAD, which was born as the result of a merger between the former Democratic Party and independent lawmaker Ahn’s political faction.

“NPAD’s co-leaders Kim Han-gill and Ahn Cheol-soo ignored the right of Gwangju citizens to choose their mayoral candidate and pushed ahead with nominating someone who would have been defeated should there have been an internal party race. NPAD has perpetrated the oldest and most tyrannical politics.”

He further noted that the party is “obsessed with the arrogance and self-righteousness that anyone it nominates would be elected,” and added that he could no longer share the values or philosophies of the party’s leaders, who he claimed trampled on Gwangju citizens’ last remaining pride.

Mayor Kang also left the party on Saturday, saying he could not accept its “uncivilized and anti-democratic decision, which humiliated Gwangju, the shrine of democracy.”

Gwangju Metropolitan City is a traditionally stronghold for the opposition and is strategically crucial in the June 4 local elections.

Sohn Hak-kyu, a standing adviser to NPAD, also criticized the party’s move to nominate Yoon without sufficient discussion and consultation with party members.

“It is certainly wrong for NPAD to proceed with this strategic nomination, which deprived the party members of the right to choose,” he told reporters yesterday. “It goes against democracy and even hurts the spirit of the Democratic Party.” Sohn also took issue with the fact that the party nominated Yoon late at night, which he believed was intentional.

Yoon, 65, runs his own eye clinic and has been active in nongovernmental organizations. The obscure politician joined NPAD in December on the back of a lengthy friendship with Ahn, NPAD’s co-chairman, who was previously a doctor.

Now that Lee and Kang are running as independents, the issue remains which candidate will concede for the other, as both have strong political ambitions.

When asked yesterday by the media about the possibility of uniting with Kang, Lee responded: “We agreed on the principle that unity should be made in consideration of the timing and what voters want. But more details remain to be discussed.”