Metro’s operating system was buggy back in 2007

Metro’s operating system was buggy back in 2007 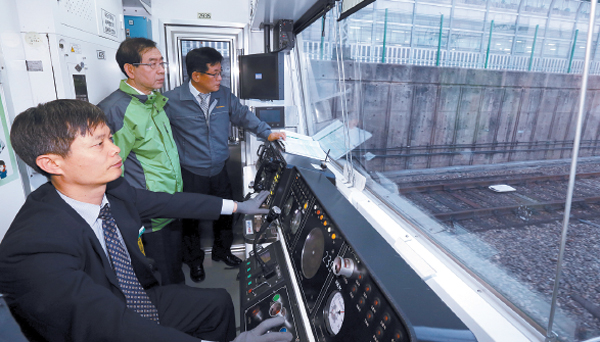 Seoul Mayor Park Won-soon, center, conducts an inspection visit aboard a driver’s cabin in a train of subway line No. 2 yesterday, riding from City Hall Station to Seongsu Station. [NEWSIS]

The automatic train-stopping system (ATS) used by the Seoul subway system, which is being blamed for causing a rear-end collision last week that injured 238 people, malfunctioned 642 times from January through June in 2007, according to a report by an employee of Seoul Metro.

An eastbound train on Seoul Metro line No. 2 leaving Sangwangsimni Station in Seongdong District, eastern Seoul, was rear-ended Friday by another train that failed to stop at a signal. The focus is now on the ATS, an older system from the 1980s and 1990s that seems to not sync with a newer system also being used in the Seoul subway system.

The ATS was designed to control distances between trains. Its primary function is to keep a safe distance of at least 200 meters (219 yards) between two trains, but it didn’t function properly at the time of the incident.

The report written in 2009 by a former member of the signal division of the company, Koh Chang-seok, warns that the use of the incompatible systems could cause disruptions.

The report found that in January 2007 alone, the ATS had technical glitches on 199 occasions. The ATS is older analog technology, while the automatic train-operation system (ATO) is new and digital.

Currently, 38 trains are using ATO, which was developed by Siemens and other companies in the 2000s. There are still 50 trains using ATS, which was developed in Japan in the 1980s and ’90s. The ATO system was introduced in 2007, which triggered mechanical conflicts with the older system.

“In the first three years, there were a number of disruptions because of compatibility issues between the two systems,” said an employee of Seoul Metro who asked not to be identified.

“On one day, a technical management team would be dispatched six times to fix the problems,” the official said.

Seoul Metro said it has synchronized the older system with the new one. “We’ve already worked it out to prevent any problems associated with frequency conflicts by improving the older version,” said Kim Seok-tak of the subway operator. “The issue is not directly related to the collision.”

Seoul Metro, which operates subway lines No. 1 through No. 4, uses both the old and new versions of the train-stopping system. The trains on subway line No. 2 are in the process of adopting the new ATO system, according to Seoul Metro.

The police kicked off an investigation to verify who was responsible for the safety mishap. The police yesterday summoned two officials of Seoul Metro for questioning over handling of signal errors.

According to the police, a Seoul Metro official found an error on the signal system at around 1:30 a.m. on Friday, about 14 hours before the two trains crashed.

An investigation team at the Seoul Metropolitan Police Agency also raided the headquarters of Seoul Metro Tuesday as part of the probe.