Coach Hong Myung-bo, right, announces the names of the 23 players who will compete for Korea in the 2014 Brazil World Cup yesterday at the National Football Center in Paju, northern Gyeonggi. [NEWSIS]

PAJU, Gyeonggi - The 23-man roster for the 2014 Brazil World Cup next month was announced yesterday by national team Coach Hong Myung-bo at the National Football Center in Paju, northern Gyeonggi.

Hong identified the Taegeuk Warriors in front of about 100 reporters and photographers, and expressed his resolve for a successful showing at the world’s biggest football event.

There were few surprises. Many of the players selected were members of the 2010 London Olympics team, including striker Park Chu-young and Ki Sung-yueng, who were the core of the squad that won the bronze medal under Hong’s leadership.

Most of the Korean players in the European leagues such as “Sonsational” Son Heung-min were included as well.

At 11 a.m., Hong entered the conference venue with his staff, including assistants Park Kun-ha and Ton du Chatinier, and led a silent tribute of about 20 seconds to the victims of the April 16 Sewol ferry disaster.

Each time Hong announced a name, a video screen showed clips of the player in action and his profile. 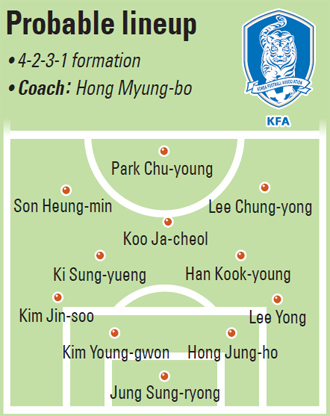 Twelve players from the London Olympics team are on Hong’s roster. Striker Park Chu-young is expected to be placed at the top of the offense line under Hong’s 4-2-3-1 formation. Backing him up will be 196-centimeter (6-foot-4) striker Kim Shin-wook of the Hyundai Tigers, who is a leading scorer in the K-League Classic with six goals, along with Lee Keun-ho of Sangju Sangmu Phoenix and Koo Ja-cheol of FC Mainz, who also can play center midfield.

The biggest surprise came when Hong announced his eight defenders, and the name of Park Joo-ho of FC Mainz wasn’t heard.

“The left wing-back was the most difficult position for me to decide,” Hong said. “I, and my coaching staff, decided not to bring Park because the injury to his right little toe is more serious than we thought. He had a small operation on that toe, and he hasn’t even taken out the stitches yet. I never imagined a team without him in the past few months, but it just happened.”

Yoon Suk-young of the Queens Park Rangers took Park’s spot. Hong had consistently maintained that he would not call up players without enough playing time at their clubs, but the coach said Yoon proved in a few recent English Championship League matches that he is good enough to represent the country next month.

“After Park was injured, we have been carefully monitoring Yoon by sending our staff to England, and they told me he is ready to roll,” Hong said.

The rest of the defenders are 33-year-old veteran Kwak Tea-hwi, who will make his first World Cup appearance, Kim Jin-soo, Kim Young-gwon, Hwang Seok-ho, Hong Jung-ho, Lee Yong and Kim Chang-soo. Cha Du-ri of FC Seoul, who was a member of the 2010 South Africa and 2002 Korea-Japan World Cup teams, will not play in Brazil.

There were no surprises, either, in the midfield positions. Key players such as Son Heung-min, Lee Chung-yong, Ki Sung-yueng and Kim Bo-kyung were included as expected, and Ha Dae-sung of FC Guoan will be a backup option to Ki, who will be paired up with Han Kook-young as the defensive midfielders. Ji Dong-won of FC Augsburg, who scored a goal against England in the London Olympics, also had his ticket punched to Brazil.

The biggest midfield surprise was the absence of Lee Myung-joo of the Pohang Steelers, who has been the hottest player in the K-League Classic. “I needed a backup option for Han Kook-young, who will have a bigger role in defense than Ki,” said Hong. “But Lee shines when he spends more time in offense and that’s why I picked Park Jong-woo instead.”

Hong said the squad may not be the best one in the history of Korean football, but it has the potential to be the best in the future, considering the age of the players and their experience.

The average age of the national team is 25.9 years old, which is 1.4 years younger than the 2010 squad. The oldest player is defender Kwak at 33 and the youngest is Son at 21.

“I know many people worry that the team is too young,” said Hong. “But I think they already have experienced many high-level matches, both on the national team and their club teams. Korea may be among the nations that face the toughest challenges, but I think our teamwork is strong and it can overcome any challenge in the World Cup.

“The country is having a hard time emotionally because of the ferry disaster, and I hope we can bring a flash of hope for the nation with some good outcomes.”