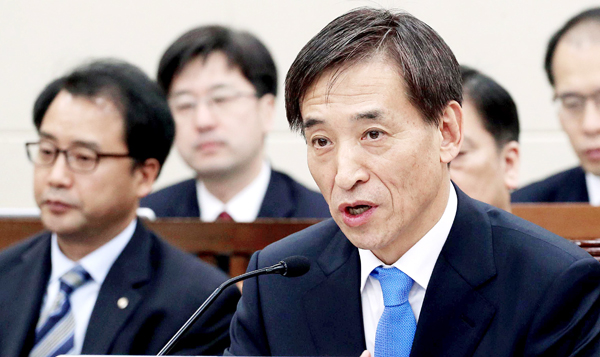 Bank of Korea Governor Lee Ju-yeol recently said he was worried about the large current account surplus and added that a more balanced account is economically desirable. [JoongAng Ilbo]

There has been a significant economic element of which few took notice over the past few weeks in the wake of the Sewol ferry disaster: the steep appreciation of the Korean won. The U.S. dollar slipped to 1,020 won, losing 4 percent against the Korean currency in just a month. It is expected to slip further to below the psychologically important 1,000 won mark and enter the 900 won plateau. Those who took trips overseas during the long holiday weekend enjoyed the benefits of a strong currency.

In the past, we would have heard alarms about the ramifications for exports and corporate profitability. This time, it is uncharacteristically quiet. It may not be only the overall pall that weighs heavily on a society in mourning for hundreds of young victims of the sunken ferry. I want to interpret this positively as the mitigation of phobia over the foreign exchange rate and its effect on our export-driven economy. We have long believed that the weaker the currency, the better for a country that lives off selling industrial products abroad. But it just may be that we have outgrown our obsession with a weak currency.

People have long endured government-led currency policy that overwhelmingly favors exports. They obliged in a way not unlike younger siblings of hardscrabble days past who happily agreed to give up their own education so the entire family could support college for the eldest. The family believed everyone would benefit one day if the oldest in the family succeeds. It worked that way for some time for Korea. Exports by large manufacturers drove the economy, creating jobs and growth for everyone.

But the trickle-down effect has waned, thinning drastically since the global financial crisis. Large exporters became richer, but their expansion has failed to translate into investment and hiring. The won weakened too much for its fundamentals since 2008, overly benefiting big exporters. Exports fared well even when the dollar averaged 955 won in 2006 and 929 won in 2007. Exports rose 14.1 percent from the previous year in 2007 and the current account surplus reached $11.8 billion.

Surpluses over the past few years ballooned. Innovative brands and the global economic recovery helped. But a weak currency also played a critical part. The current account surplus reached $79.9 billion last year, equivalent to more than 6 percent of gross domestic product. A 0.8 percent contraction in imports also played a part.

There is no such thing as free lunch. Because of a weak won, Koreans paid more for imported items. Drivers paid more for fuel. Korea’s net oil imports total about $60 billion a year. If the won is 5 percent cheaper, Koreans would pay 3 trillion won ($2.93 billion) extra annually for their fuel. Expensive imports drive down real income and the appetite for spending, hurting domestic demand. Government spending also rises to keep the currency weak. The cost of intervention in the foreign exchange market reaches 2 trillion won to 3 trillion won a year. The central bank must issue more currency stabilization bonds to offset excessive liquidity from large current account surpluses.

The won - through its recent steep gains - may actually be recovering its actual value. Bank of Korea Governor Lee Ju-yeol recently said he was worried about the large international account surplus and added that a balanced surplus is more desirable for the economy. The currency is bound to rise if the current account surplus continues to get bigger. The gross domestic product is also expected to rise close to 4 percent this year.

If a strong won is here to stay, we must make most of the circumstances. We could use the momentum to revive domestic consumption and seek balanced growth from external and local demand as well as ease discrepancies of wealth that are rampant in the economy. The effect on the domestic economy would be great when coupled with the government’s deregulation campaign. Large exporters have long prepared themselves for a less beneficial currency exchange rate by moving manufacturing bases overseas and diversifying payment currencies. Small and midsize exporters are the ones that could be hurt. The government should continue striving to limit currency volatility to buy time for them to build resilience. If the pace of the won’s strengthening is too fast, the Bank of Korea could step in through interest rate cuts. Few would argue against lowering the benchmark rate with scant signs of inflation and with concerns about depressed consumption in the wake of the Sewol ferry disaster.

Singapore and South Korea were stars among the rising Asian tigers until the 1980s. Today, Singapore is far ahead with one of the world’s highest per capita incomes of $50,000. Strong currency was a factor behind the wealth of the city-state. Singapore strengthened its currency since the 1990s and promoted the domestic-oriented services sector, such as finance, tourism, medical services, logistics and education. South Korea should learn from its transition.