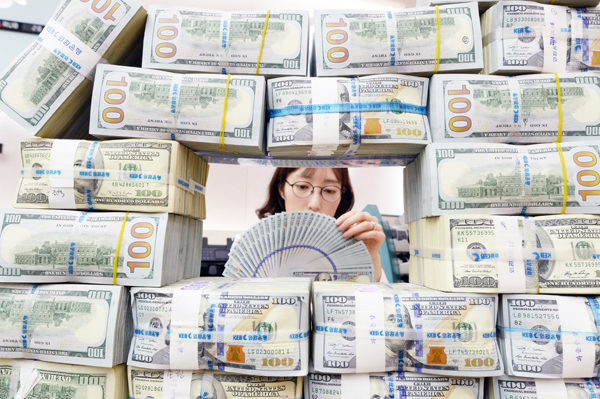 A dealer at the Korea Exchange Bank counts dollar notes yesterday at its headquarters in Jung District, central Seoul. The Bank of Korea said yesterday that the country’s foreign exchange reserves as of the end of April were almost 356 billion U.S. Dollar, breaking a previous record. [NEWS1]

Major exporters like Samsung Electronics and Hyundai Motor say they can handle the seemingly unstoppable rise of the Korean won against the dollar.

Yet many analysts believe that although the impact may be limited for some conglomerates, their profit margins will certainly weaken if the won strengthens to the 1,010 won level. And small and midsize exporters with less ability to hedge currency risks will find themselves in a critical situation.

Companies like Samsung and Hyundai Motor have been expertly hedging against currency volatility since 2008 when the won was around 1,000 won ($0.97), and there were rumors that foreign investors would be pulling out en masse once their investments in Korea matured.

They hedge against currency risks in a variety of ways, including diversifying their trading currency from dollars to other currencies such as the euro or the yen. The expansion of production overseas dramatically reduces the risk of an overly strong won. And some companies like LG Electronics have set up overseas financial centers in places like New Jersey, Amsterdam and Beijing.

According to Samsung, the appreciation of the won is not entirely negative as it reduces the cost of raw materials imported and used in its final products. The tech giant said it has been diversifying its trade payments into other currencies and increasing production from overseas plants. 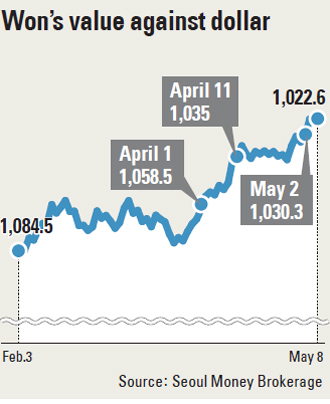 Some companies initiated their contingency plan before the won started to appreciate sharply. Last month, the won broke the 1,050 won barrier, quickly strengthened to 1,030 won to the U.S. dollar and then to the 1,020 level this week.

“The appreciation of the won has slowed down the profitability improvement,” said a Hyundai Motor official last month during a conference call in announcing the automaker’s first-quarter performance. “We are already in a contingency plan as we believe the won value will continue to rise.”

The won held within the 1,020 won range throughout the entire day yesterday after it quickly tumbled from 1,030 won to 1,020 won on Wednesday. The won closed slightly weaker than the previous day at 1,022.6 won against the dollar. According to the Bank of Korea, the country’s foreign exchange reserves recorded almost $356 billion in April, breaking the previous records for the past 10 months.

As a result, major exporters including Samsung Electronics and Hyundai Motor closed slightly higher on the stock market.

Yet experts believe that even with the hedging, many exporters have already suffered losses from the recent appreciation and would further suffer if the won breaks through the 1,020 won barrier to 1,010 won.

Between late last year and early this year, many companies have set their business strategy for this year under the assumption that the won would be traded as high as 1,050 against the U.S. dollar. Considering that in most cases the companies expect the worst, even 1,050 won is a conservative figure and that many believed the won exchange to be traded between 1,060 won or so. But since the beginning of the year, the won has appreciated more than 4 percent so far.

Private think tanks such as LG Economic Research Institute estimates that an appreciation of 10 percent of the won against the dollar will likely incur a quarterly net loss of 730 billion won for Samsung Electronics and 100 billion won or so for LG Electronics. Hyundai Motor and its affiliate Kia Motors are expected to see their profit shrink 120 billion won and 80 billion won. 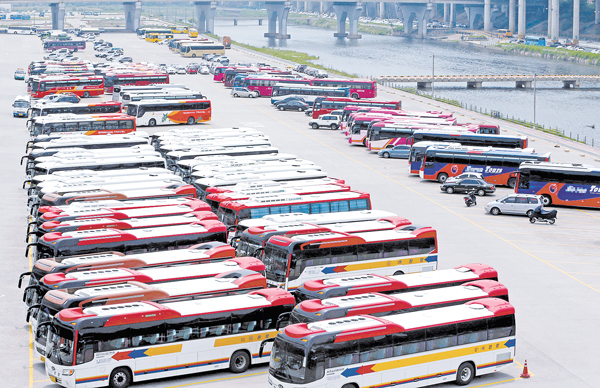 Charter buses are parked near Tancheon in Jamsil, southern Seoul, Wednesday, idle after the Sewol tragedy led to cancellations of school trips. Mourning for the victims of the ferry has hit the domestic economy overall. By Byun Sun-goo

The bigger problems lie on small and midsize exporters who are more vulnerable to currency volatility. In fact, a survey by the Industrial Bank of Korea (IBK) on 105 small and midsize exporters conducted last month showed that 40 percent of the companies consider 1,052.8 won as the break-even point. A further appreciation of the won would put the companies in critical condition.

If this is so, already nearly half are piled under huge losses that could drive them out of business. While export is likely to shrink in the second quarter on the back of the appreciating won, there are growing concerns whether the Korean economy could reach its 4 percent target by the end of the year, especially as the domestic market has been hit hard by the nationwide mourning of the Sewol ferry tragedy.

Adding to the woes about the strong won, in the wake of the Sewol ferry disaster, a frozen domestic consumption market is another hard challenge for the Korean government, which has set its annual GDP growth target at 3.9 percent this year.

In a nutshell, the current economic situations both at home and abroad are more adverse than ever, experts worry.

The Korea Institute of Finance (KIF) yesterday lowered its growth forecast this year from 4.2 percent to 4.1 percent, largely due to the impact of the accident on the market.

The institute expressed worries about contraction in private consumption.

KIF President Yun Chang-hyun said the impact may last until June, and called on the government to front-load its budget more in the first half of the year.

“Whether the country can achieve around 4 percent GDP growth this year is up to how fast private consumption recovers,” Yun said. “The government should spend aggressively in the first half of the year to boost consumption. 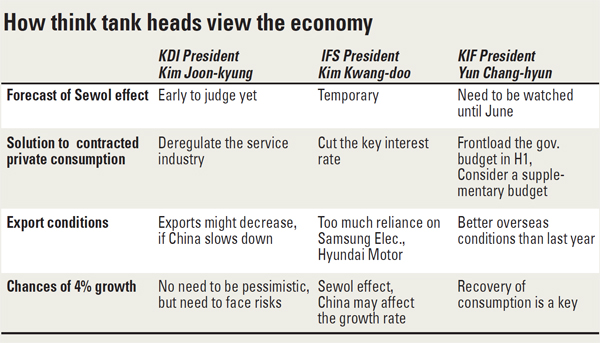 “Some tourism sites that were hit hard by the Sewol accident need the government’s financial support,” he added. “If consumption remains low until June, the government also should think about making a supplementary budget.”

The institute said it decided to adjust the growth forecast due to negative consumer confidence.

“Worse consumer confidence in the second quarter is expected to cut the annual GDP growth rate by 0.8 percentage point,” the institute announced.

“How long the bad consumer confidence lasts may determine this year’s growth,” said Park Seong-wook, director of macroeconomic research at the institute.

Not only Yun and his institute but also other leading think tanks and analysts are calling for pre-emptive government action to minimize the Sewol tragedy effect on the economy, ahead of a presidential meeting on current economic conditions, slated for this morning.

Kim Kwang-doo, known as President Park Geun-hye’s economy mentor and president of the Institute for the Future of the State (IFS), said in an interview with the JoongAng Ilbo that the Sewol impact might be temporary.

But Kim did acknowledged severity of contraction in private consumption.

“In the short run, Korea needs to consider cutting the benchmark interest rate,” Kim sad. “That card will be effective to show the market the government’s strong willingness to bolster the economy. Along with that, the government also needs to come up with measures to revive the middle class and small businesses.”

If consumption decreases and the domestic market turns into a recession, it would be only conglomerates that enjoy the fruits of economic growth, the IFS head explained.

He also warned that the Korean economy is too reliant on robust exports of conglomerates like Samsung Electronics and Hyundai Motor.

“Strong exports of the country might be an optical illusion,” Kim said. “Because of their strong performances, the country’s overall exports and the average have climbed. But other than the two, export records aren’t that good, which means low salaries for ordinary workers.

“A structural reform is needed to eliminate such polarization in exports, too,” he added.

Kim Joon-kyung, president of the state-run Korea Development Institute, said it is early to assess the economic impact of the accident. A solution to ease the frozen consumption would be to deregulate the service industry, Kim said.

“Even if the Sewol tragedy shock turns out to be significant, the government will have to push for its three-year economic innovation plan and deregulation plan without alteration,” the KDI chief said. “Revitalization of the domestic market is dependent on how aggressively the government loosens regulations on the service industry. So the government should keep its policy direction without changing.”

Kim also cautioned that the country needs to be aware of China’s slowdown lately.

“Since China is the largest market for Korea, we need to have measures in response to unexpected situations in the Chinese economy,” Kim said. “China might face a temporary recession in the process of tackling its shadow economy.”