City closes in on title after 4-0 win

City closes in on title after 4-0 win 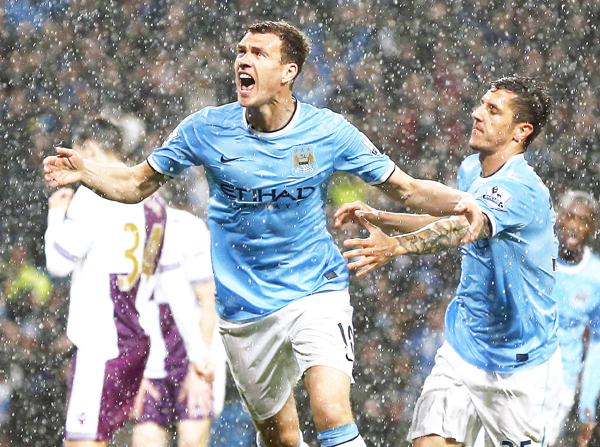 Manchester City smashed through the 100-goal barrier in the Premier League with a 4-0 win over Aston Villa on Wednesday that moved the team two points clear with a game left and within touching distance of a second title in three years.

A draw at home to West Ham on Sunday will be enough for City to settle a thrilling title race, with only Liverpool capable of stopping them. Chelsea, in third place, has been knocked out of contention.

If City does go on to capture the championship, it will have done so in style under attack-minded coach Manuel Pellegrini - just as was desired by the club’s Abu Dhabi owners.

“In the way we play, I am very happy to win the title this way,’’ said Pellegrini, speaking as if the Premier League trophy was already in City’s hands.

“There are different ways to win titles - I choose this one with attractive football ... Maybe you can win titles other ways. For me, the aesthetic part is very important.’’

City has been most pundits’ favorite the whole season but the team is doing it the hard way - just like in 2012 when it won the title with two injury-time goals in its final match.

Pellegrini’s side has been top for just 11 days this season - compared to 59 for Liverpool, 64 for third-place Chelsea and 128 for fourth-place Arsenal.

But City has hit form just as Liverpool has started to blunder, dropping five points in its last two games. City, by contrast, has won its last four matches and has a superior goal difference of 13 to Liverpool.

There was a party atmosphere inside Etihad Stadium as City fans celebrated Toure’s brilliant goal, a powerful run through Villa’s defense from inside his own half.

For the first 63 minutes, however, it had been very different.

Villa’s packed defense had held firm under constant pressure and it was looking like one of those nights for City.

Pellegrini remained calm on the touchline, though, and the hosts didn’t abandon their passing philosophy, eventually making the breakthrough in the 64th when full back Pablo Zabaleta - on yet another raid down the right - crossed for Dzeko to steer home from close range.