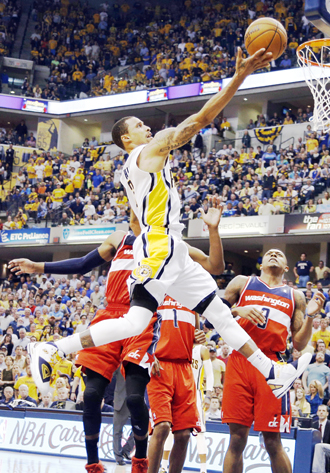 Big Roy came up with a big answer for his critics and his teammates Wednesday night. He played like an All-Star when the Pacers needed it most.

After 48 hours of questions and criticism, Roy Hibbert scored a season-high 28 points, grabbed nine rebounds, blocked two shots and altered a handful of others to help the Pacers get even in the Eastern Conference semifinals with an 86-82 victory over Washington.

Hibbert sounded more relieved than redeemed. “David [West] always talks to me about being the person who rescues yourself when you’re in the middle of the ocean,” he said after Indiana tied the best-of-seven series at 1-1. “There’s nobody who can throw a lifesaver or a rope out to help you. So I had to do it myself.”

The next step is proving he can play this way on Friday when Washington hosts Game 3.

Hibbert went into Wednesday with a combined 37 points and 24 rebounds in Indiana’s first eight playoff games. Twice in the previous four he failed to score a point or grab a rebound.

After talking to his college coach, John Thompson III, and Colts linebacker Robert Mathis, a close friend, Hibbert blocked out the firestorm, focused on basketball and fueled the decisive 6-0 run late in the fourth quarter.

George Hill finished with 14 points, Paul George had 11 points, six rebounds and four assists, and Lance Stephenson added 12 points, seven rebounds and five assists. And for the first time this postseason, the Pacers held an opponent to fewer than nine 3-pointers. Washington finished 5 of 21 from behind the arc, the lowest percentage (23.8) in the playoffs this year.

Much of the credit went to Hibbert, who helped open up the offensive lanes for his teammates and protected the rim well enough that Indiana could spread out and defend the perimeter.

“He’s got our attention now,” said Drew Gooden. “We’ve got to be focused on guarding the Roy Hibbert we know.”

It was a lost opportunity for the Wizards, who won their first four playoff games on the road - three at Chicago and Monday night at Indianapolis - and could have gone home with a commanding 2-0 lead.

Washington led by as much as six early in the third quarter and rallied in the fourth to take a 77-74 lead with 5:01 to go before Hibbert and George scored six straight to give the Pacers the lead for good.

“He came out with a lot of intensity and established position,” Beal said. “We didn’t play our best game. We didn’t shoot the ball and we didn’t defend like we know we’re capable.”