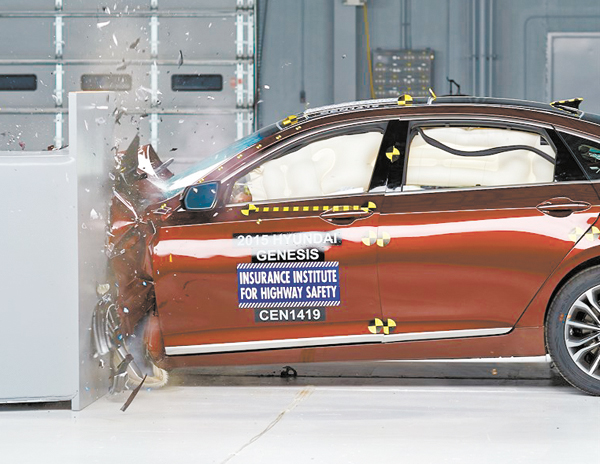 Hyundai Motor’s new Genesis is tested in the U.S. Insurance Institute for Highway Safety’s (IIHS) small overlap front crash. The Genesis received a rating of “Top Safety Pick+,” which is the highest score from the IIHS. Provided by IIHS

The company said yesterday that the second-generation Genesis received IIHS’ highest honor, “Top Safety Pick+” after becoming the first passenger car to receive top grades in all 29 categories of the test.

In the test, which was added in 2012, 25 percent of a vehicle’s front end on the driver’s side strikes a 5-foot-tall barrier at 40 miles per hour. It is designed to replicate the damage caused if the front corner of a vehicle struck an object such as a tree or utility pole.

“In the small overlap test, the driver’s space was maintained well, and injury measures recorded on the driver dummy indicated low risk of any significant injuries in a crash of this severity,” IIHS said in a release.

The Genesis also received a rating of “Superior” for its front crash prevention system, becoming the first model from Hyundai or Kia to do so.

“The optional front crash prevention system, which is being offered for the first time on the 2015 model, earns a superior rating because of its automatic braking capabilities,” IIHS said. “In track tests, the car stopped completely before hitting the target in tests at 12 mph and 25 mph.”

Industry observers predict the crash-test results will help Genesis sales in the United States, where Hyundai is currently shipping the premium sedan.

“The new Genesis sales are expected to reach 24,000 units in the U.S. and 68,000 units globally, up 21 percent and 75 percent, respectively, compared to a year ago,” Lee Myung-hoon an analyst at HMC Investment and Securities, said in a recent report.