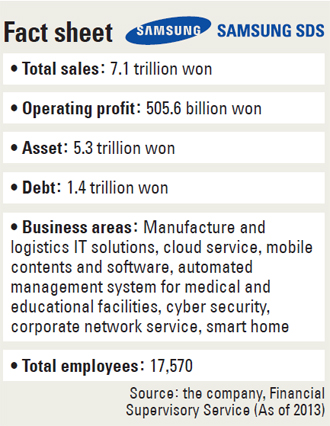 Samsung SDS, the IT service arm of Samsung Group, yesterday announced it will go public this year.

It is the first Samsung affiliate to opt for an initial public offering since Samsung Life Insurance raised 4.9 trillion won ($4.8 billion) in 2010, the largest Korean IPO ever.

The company said the goal of the IPO is to expand overseas business divisions and further develop future technologies by acquiring smaller IT ventures inside and outside the country. Merger and acquisition processes will begin by year’s end, along with the IPO procedures, said the company.

“Through the IPO, Samsung SDS hopes to take the leap to become a global ICT service provider,” said Jun Dong-soo, CEO of the company. “We will especially focus on developing cloud, Big Data and Internet of Things technologies and apply them in IT solutions and services in various areas such as telecommunications and health care, with which we will compete in the global market.”

The company explained in a statement that the movement is in line with recent IPOs by global IT giants like Facebook and Twitter in the United States and Weibo in China, as a solution to secure enough cash and diversify fund procurement methods for research and development, and expansion.

Samsung SDS already is in the logistics and mobile device solution business in more than 20 countries in Southeast Asia, North America, Europe and the Middle East. Of its 7.1 trillion won in sales last year, 44 percent was from overseas. The company hopes to boost overseas sales to 50 percent by end of this year.

Another goal for Samsung SDS is to diversify its business portfolio, particularly in software. The company does system integration and builds computing systems that connect software and hardware, from IT solutions for manufacturers and logistics companies to management systems for medical and education facilities.

“Many consider Samsung SDS only as a system integration developer, but actually we have kept diversifying our business spectrum,” said a company spokesperson. “Like IBM succeeded in expanding its business from PC manufacturing to software, SDS will expand its business to future technologies while continuing to invest in existing ones.”

The IPO also will benefit individual shareholders who have repeatedly called for an IPO to bring them transparent returns, the company said in a statement.

According to stock information website Presdaq, which specializes in the over-the-counter market, the company’s share price reached a record 225,000 won, up 75,500 won from the previous day.

According to the Financial Supervisory Service, Samsung Electronics is the largest shareholder with 22.6 percent, followed by Samsung C&T (17.1 percent) and Jay Y. Lee (11.3 percent). Lee is the largest individual shareholder, while his sisters Boo-jin, president of Hotel Shilla, and Seo-hyun, president of Samsung Everland’s fashion division, each hold 3.9 percent of shares.

Samsung SDS yesterday sent out IPO proposals to 15 brokerage firms. The company will select a supervisor this month then finalize a schedule.