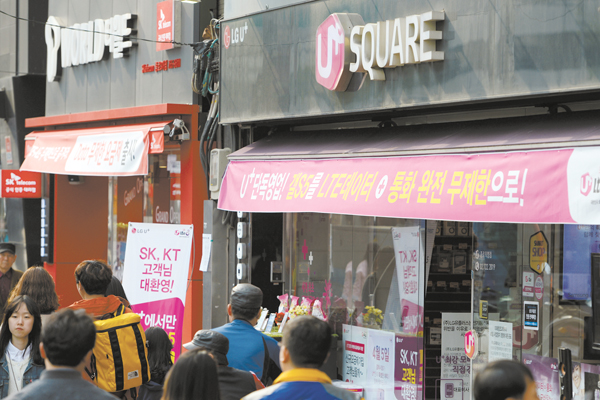 A view of a street in central Seoul with mobile dealers last month. [NEWS1]

The nation’s top three mobile carriers SK Telecom, KT and LG U+, which have been restlessly competing against each other and have turned the domestic mobile market into a battlefield, unveiled what they called unlimited LTE data plans last month.

The three mobile carriers introduced the “unlimited” data plans while still under a government-enforced 45-day business suspension for offering illegal subsidies. The first unlimited plan launched by the nation’s No. 3 mobile carrier LG U+ on April 2.

The companies said that the plans were launched for the benefit of their customers, but it is necessary for subscribers to double-check if they are actually coming out on top.

The unlimited LTE data plans launched by the top three mobile carriers offer a similar amount of data at different prices, but none are unlimited. All three carriers limit the speed of the LTE data after a certain amount is used even though the plans are called unlimited.

All three mobile carriers reduce the LTE data speed to three megabits per second (Mbps) when their users exceed the amount of data stipulated in their plan. The average speed of broadband LTE is about 50 to 60 Mbps so the speed is one-twentieth slower.

The amount of LTE data provided without a limit on speed differs by mobile carrier.

SK Telecom provides eight gigabytes, 12 gigabytes and 16 gigabytes of LTE data per month, depending on the plan. KT offers 10 gigabytes or 25 gigabytes every month.

Both carriers provide two extra gigabytes per day without a limit on speed when their subscribers exhaust the monthly amount of LTE data.

LG U+ does not limit its LTE data on a monthly basis, instead providing two gigabytes per day without a limit on speed.

The amount of speed of LTE data is also limited when using tethering services to connect to smartphones or laptops.

KT subscribers can use an additional two gigabytes of data for tethering on top of their basic high-speed LTE data.

For LG U+, maximum data usage for tethering is two gigabytes of LTE per day.

SK Telecom users cannot use tethering at all on top of their basic amount of data.

The new string of so-called unlimited plans started when LG U+ Vice Chairman Lee Sang-chul launched his company’s deal on April 2, saying the carrier had been preparing the plan for more than a year.

Within half an hour of LG U+’s announcement, No. 1 mobile carrier SK Telecom sent out press releases announcing its own LTE unlimited deal.

The nation’s second-largest mobile operator KT followed suit with its own unlimited plan on April 7.

SK Telecom’s LTE National Unlimited plan is more like an upgrade of its existing “unlimited” plans.

These new plans have contributed to skyrocketing prices for customers.

“Three years ago, when carriers launched 3G unlimited data plans, the plans were 54,000 won on average with 36,000 won of basic monthly fees,” said a spokesman for the Korea Consumer Affair Institute.