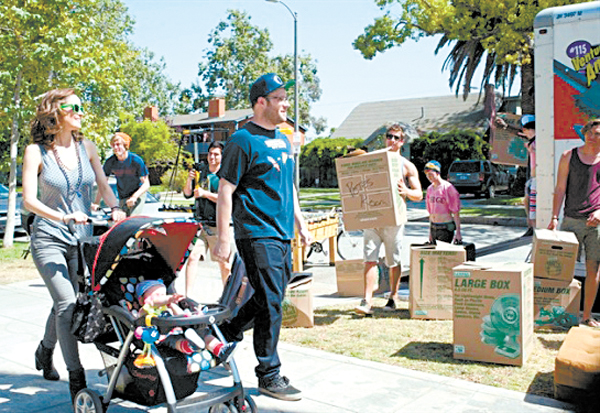 If ever two genres of film were inextricably intertwined, it would seem to be the frat house movie and the gross-out comedy. After all, do frats ever do anything that’s NOT gross? Not in the movies, they don’t.

“Neighbors,’’ starring (and produced by) Seth Rogen and directed by Nicholas Stoller, proudly straddles these two genres and boldly tosses in a third: The “We’ve-just-become-parents, NOW-what?’’ movie. You know these: Baby arrives, cute as a button but bringing ALL kinds of trouble, and then things are resolved in a syrupy sweet finale.

It’s safe to say that syrupy sweetness is not a problem with “Neighbors.’’ In fact, it is noisy, crude, profane, gross, and sometimes mean. Luckily, it’s also extremely funny, and you’ll realize by the end that it has some heart, too.

Most importantly, what it may suffer in narrative coherence it makes up for with a first-rate cast: the reliably funny Rogen, the game-for-anything Rose Byrne, and in the most pleasant surprise, a truly excellent Zac Efron as an immature, narcissistic, vindictive and, by the way, unbelievably buff frat leader whose obnoxious brio might just be masking deeper issues. (Zac, as a parent who had to watch the “High School Musical’’ films at least 400 times, maybe more, let me just say: I forgive you now.)

Rogen plays Mac Radner, a young father who clearly hasn’t smoothly completed his transition to adulthood. He still dreams of the epic partying he once engaged in. And so does his wife, Kelly (Byrne, beautiful as always, and energetically foul-mouthed here.) When a friend suggests an evening at a rave, Kelly and Mac want to go so badly, they decide to bring baby. But they spend so much energy gathering up the stroller, the car seat, the breast pump and the cooler, that they collapse in a heap by the front door.

Still, the couple’s doing pretty well in their new suburban digs. Until Delta Psi moves in, right next door.

Mac and Kelly try to make nice with the frat’s leader Teddy (Efron), who’s such a fine physical specimen that Mac calls him “something a gay guy designed in a lab.’’ Debating the least geeky way to say “could ya keep it down?’’ they head next door, and end up partying all night, just to show how cool they are. But soon, the noise is too much, and they’re calling the cops. The war is on.

Occasionally the humor goes awry, or just too far. A baby munching on a used condom? “What’s that you have there, sweetie, a balloon?’’ Mac asks. (Cue the delighted groans in the multiplex.) Maybe the joke could have stopped there. But it doesn’t.

And how about the visual gag involving, well, a nursing woman’s breasts? Was that really necessary?

On a brighter note, there’s a priceless bit in which Mac and Teddy bond by trading inter-generational “Batman’’ impressions: Teddy does Christian Bale, and Mac does Michael Keaton. Another fun scene involves the frat guys trying their hand at Robert de Niro impressions.

At a certain point, the movie starts to feel like an extended “Saturday Night Live’’ skit, with not much concern for narrative progression. But few people will complain.

And a closing scene that was improvised, placing a shirtless Rogen and Efron in front of an Abercombie & Fitch store, is not only funny but surprisingly touching. It helps that Efron looks exactly like an Abercrombie model.

“Neighbors,’’ a Universal Studios release, is rated R by the Motion Picture Association of America “for pervasive language, strong crude and sexual content, graphic nudity and drug use throughout.’’ Running time: 96 minutes. Three stars out of four.