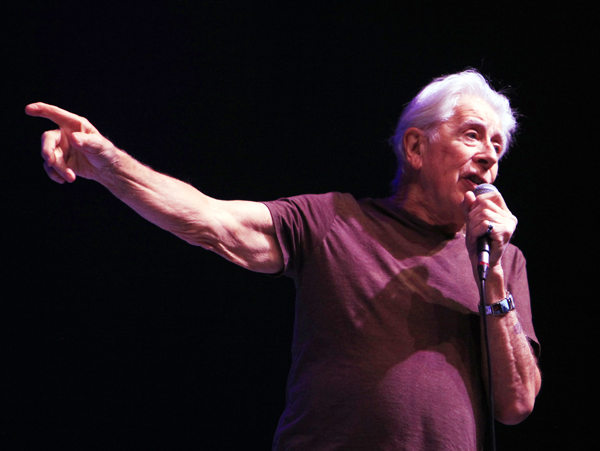 Blues legend John Mayall performs during a concert in Bucharest, in this 2012 file photo. In an interview from his California home, Mayall said politics was a natural subject for a bluesman because the genre is all about a grim reality and the feelings it inspires. [REUTERS/NEWS1]

LONDON - Blues songs are traditionally about women who have done you wrong, working on a chain gang or being brought low by booze - but what about Christians and Muslims killing each other?

John Mayall, often dubbed the “godfather” of British electric blues, touches on just this in “World Gone Crazy,” a track on a retrospective album of newly recorded songs he is putting out this month to celebrate turning 80 last year.

To a driving beat, wailing harmonica and blues-chord progression, he sings about the guilt of living in conflicted times, the depletion of natural resources, chaotic governments and a global plague of killing.

It will all end in a reckoning, he sings, and nothing more so than the clash of religions.

“Religion. I said, religion. Always at the root of a war/The Christians and the Muslims never get along no more/They’re killing everybody/Bodies lying on the floor.”

In an interview from his California home, Mayall said politics was a natural subject for a bluesman because the genre, which emerged from the harsh life of African Americans in the U.S. Deep South, is all about a grim reality and the feelings it inspires.

“When I write songs that touch on social relevance, all you have to do is pick up a newspaper,” he told Reuters. “It was an obvious one because everyone is blowing themselves up. It’s just crazy.”

That is not to say that all blues has to be grim - or that the album is.

“You can’t spend your life in misery,” Mayall said. “If you have something in your life worth celebrating, you can put it in a blues song.”

What Mayall is celebrating in his new album, “A Special Life,” are the 70 years he has spent playing around with the blues, which he first heard aged around 10, listening to his father’s jazz records in northern England.

He helped bring blues into the international mainstream in the 1960s, an era when many British musicians took up the genre, unheralded in its home country, gave it new life before and exported it back across the Atlantic.

Mayall’s Bluesbreakers band was a crucible for some of blues-rock’s greatest legends. Eric Clapton and Jack Bruce moved on from the band to form Cream, while Peter Green, Mick Fleetwood and John McVie ended up forming Fleetwood Mac, initially a blues band.

Looking around him today, Mayall reckons blues is alive and well. His concerts, for example, bring in the old and the new, and there are plenty to pick up the mantle.

“All you have to do is check out some of the new players,” he said. “It is going on from generation to generation.”

As for his own future, Mayall said his new album was about “looking back on my life and making a call on what it feels like”.

But there was no hint of stopping as he embarks on a tour of some 59 towns and cities over seven months in the United States, Canada and Britain.

“I have good health and I am happy to be on the road all the time,” he said.