Renters in the market for jeonse flexibility

Renters in the market for jeonse flexibility 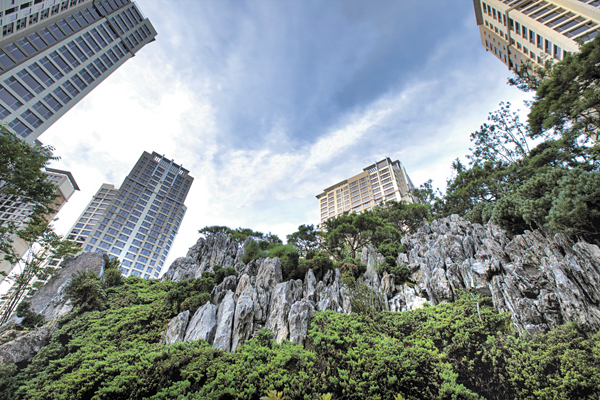 Ilsan Xi Wi City located in Goyang, Gyeonggi, was constructed by GS E&C. It has recently gained popularity because jeonse tenants can purchase their apartment after living in it for a minimum two years. Provided by the company

A 51-year old resident of Gimpo, Gyeonggi, has decided to move into a nearby apartment complex, Hanwha Eurometro, at the end of the month on jeonse, a minimum two-year rent contract with a long-term deposit.

But the condition is different from other jeonse in the housing market because the renter can choose to buy the apartment after living there for two to three years.

“The advantage is that it is 10 percent cheaper than other jeonse apartments in the surrounding area,” the Gimpo resident said. “If the next two years are satisfactory, I might think of actually buying the place.”

According to the construction industry, in just two months, 900 apartment units at Hanwha Eurometro have been rented out on jeonse contracts with the same conditions.

Homebuyers are flocking to new apartments offering similar contracts that allow jeonse tenants to become owners after living there for at least two years.

The most popular apartments are large or midsize units with a floor area of 85 square meters (915 square feet) or more.

These apartments have become popular among cash-strapped construction companies that designed the buildings after they were unable to sell units in less popular areas.

Filling the units would ease the financial burden caused by newly constructed apartment complexes that remain empty while management bills pile up. It also solves tenants’ problem of finding an apartment on jeonse. Not only is the price of these units much cheaper than other jeonse apartments, they are fully furnished and the buildings are new.

The contracts also attract potential homebuyers who are skeptical of the real estate market’s long-term recovery, although the market has started to show signs of improvement this year.

A new government policy that guarantees tenants a jeonse return after the long-term rent expires has also help boost interest in the trend. The policy was implemented last year to ease financial burdens on tenants.

Some companies, like Dongmun Goodmorning Hill in Incheon, who are trying to attract tenants who might later become buyers, have been signing up for the deposit guarantee system with Korea Housing Guarantee. If the company goes out of business and fails to pay the full jeonse amount after the contract ends, the government covers the unpaid amount.

In recent years there have been several cases where tenants were not able to recover their jeonse deposits, especially on apartments whose mortgage accounts for more than 80 percent of the traded value when added with jeonse deposit.

Even if they sold the house, the homeowners wouldn’t be able to pay off their debts without the jeonse. In cases when the apartment is auctioned off, the tenants have trouble recovering the full amount of their deposits.

The deposit guarantee system allows tenants to have stronger faith in new apartments.

There are two ways of signing up for new jeonse apartments that can later be purchased.

The first is the old-fashioned way. The tenant signs a jeonse contract with the construction company and puts down a large deposit up front. After two to three years, the tenant can withdraw the deposit and either relocate or purchase the apartment. In this case, the tenant only needs to pay the amount that was already deducted from the jeonse deposit.

The second way is payment by installments. The tenant first pays the contract account, which is roughly 20 to 30 percent of the sale price. The apartment will be registered under the tenant, which would put him or her as the owner of the apartment. The tenant can take a loan out for the payment while the construction company will cover the interest.

If the tenant decides not to buy the apartment then they will get a refund on their contract payment.

However, experts say tenants needs to be cautious when signing a contract, because the construction company could ask for compensation if a contract is broken.

Tenants must especially be aware of whether or not the construction company is financially capable of returning the contract money.

“Tenants may not be able to recover the full contract money if the company doesn’t have the financial ability to pay it back,” sad Park Won-gap, a senior researcher for KB Kookmin Bank’s real estate department.