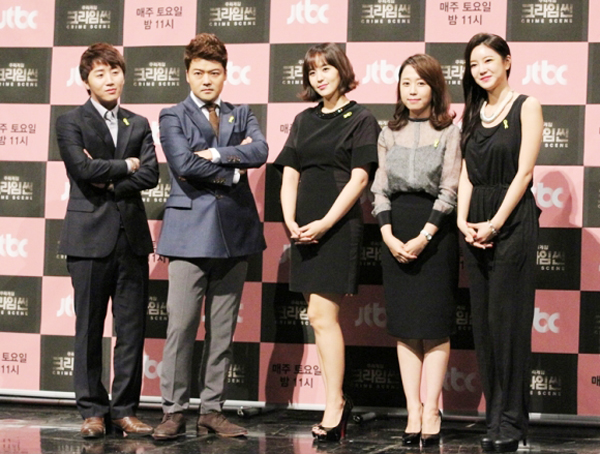 “I am super thrilled to be hosting the show,” said Jeon Hyun-moo at Hoam Art Hall in Sunhwa-dong, central Seoul, yesterday. The former KBS news presenter has been one of the strongest players on JTBC since 2011, thanks to the success of the music show “Hidden Singer.”

“I’m sure that people who are not interested in the ‘Sherlock’ series will find our show fun enough, since ‘Crime Scene’ is not only about solving the crime case but is hilarious at the same time.”

Directed by producer Yoon Hyun-joon, who was behind the JTBC show “Shinhwa Broadcast,” six entertainers will turn into crime suspects, and each person needs to prove his or her innocence through several stages.

Yoon noted that the production team is particularly concerned about the difficulty of solving the case.

“If the case is too easy, viewers will get bored in the middle of the show. So we’re trying to adjust the level as the episode unfolds,” Yoon said.