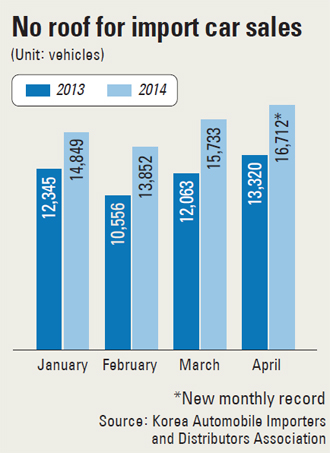 While economists say that Korean consumption is declining due to the Sewol ferry tragedy, there seems to be one exception in Korea: imported cars.

According to data released by the Korea Automobile Importers and Distributors Association (Kaida) yesterday, registration for newly imported cars last month again broke a record, reaching 16,712 units. This is a 6.2 percent increase from the previous monthly record of 15,733 units set in March. The latest sales record represents a 25.5 percent year-on-year increase.

In the first four months, foreign automakers have sold 61,146 units, up 26.6 percent from a year ago.

By brand, BMW was the best-seller, after it sold 3,625 units last month, up 33.3 percent from a year earlier and 3.2 percent more than in March. Its rival Mercedes-Benz was the runner-up and its sales are increasing at a rapid pace with 3,301 units sold in April, up 42.4 percent from a year ago and a 30.7 percent increase from March.

Volkswagen and Audi took the No. 3 and No. 4 spots, but Audi was the only German brand that saw its April sales decline, selling 1,980 units, down 19.3 percent from March.

Industry observers said that Korean consumers’ increasing preference for diesel engines is causing the increase in sales of German brands, which have many diesel models.

Diesel car sales made up 68.6 percent of total imports sold in the first four months, while gasoline fueled cars’ market share dropped 7 percentage points in the January to April period to 27.9 percent.