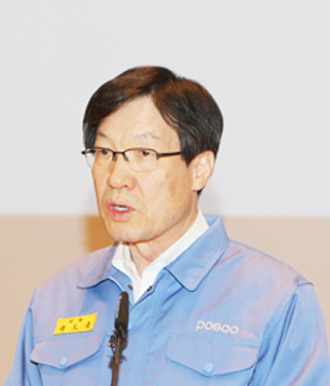 Posco Chairman Kwon Oh-joon will be speeding up his visits to the corporation’s work sites in the coming days to ensure the competitiveness of Korea’s largest steelmaker and look for ways to improve its profitability, the group said yesterday.

According to Posco, Kwon, 64, will be inspecting the steel group’s overseas affiliates, starting at Krakatau Posco, in Indonesia, followed by Thainox in Rayong, Thailand, and Myanmar-Posco Steel in Yangon.

The chairman has been emphasizing “on-site” management since he took over the position in March.

Industry insiders said that the visits come as no surprise, as the newly-appointed chairman has been trying to boost the group’s business prospects and increase communication with employees.

“Kwon is visiting production sites frequently because he holds the belief that the reinforcement of Posco’s competitiveness comes from on-site and can be achieved through active participation with employees,” Posco said.

The chairman has been trying to distance himself from his predecessor Chung Joon-yang, who led Posco through merger & acquisition deals and large investments despite a sluggish steel industry. Posco is currently reviewing plans to restructure its business portfolio, and the new CEO has been focused on improving profitability, the corporation added.

Despite in increase in sales and operating profits, Posco’s first quarter net profit fell 81 percent from a year ago. Its debt ratio was up 5.3 percentage points from the previous quarter, reaching 89.6 percent in the first quarter.

Posco said that an increase in short-term liabilities from its group affiliates, including Daewoo International, a trading and resources arm, had depressed its financial situation in the first quarter.

In the past few weeks, analysts have speculated that Posco is seeking to trim its 46 subsidiaries and streamline its businesses.

Local media reported that Posco might sell Daewoo International and other lagging subsidiaries, though Posco officially denied that, and said nothing had been confirmed.