Shipbuilders see drop in orders, but price is rising

Shipbuilders see drop in orders, but price is rising 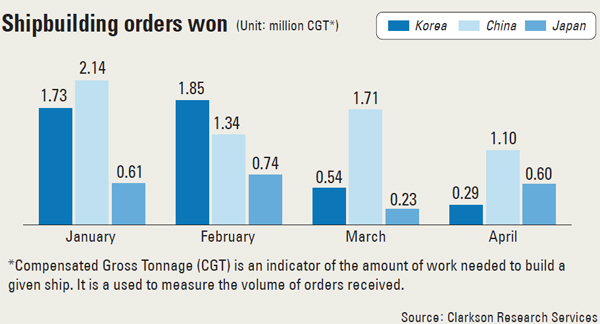 Korean shipbuilders struggling to win new orders in the first quarter, but they remain confident of a turnaround as vessel prices rise.

According to data from Clarkson Research Services, a London-based marine market researcher, Korean shipbuilders secured new orders worth only 294,167 compensated gross tons (CGTs) last month, down 84.8 percent from a year ago. It accounted for 13 percent of the market share to place No. 3 in the world.

In April, Chinese companies topped the list by winning 1.10 million CGTs, making up 48.8 percent of the market share. They were followed by Japanese shipbuilders, which clinched orders for 604,664 CGTs, taking 26.7 percent of the global market.

CGT is a unit of measurement of shipbuilding output calculated by applying a conversion factor that reflects the amount of work required to build a ship in relation to a vessel’s gross registered tonnage. It is generally used as a measure for the volume of orders received.

April marked the first time in 15 months that Korea’s monthly volume of new orders has fallen behind Japan. This year, Korea only topped the list for new orders in February, while China has dominated every other month.

But what’s more concerning to Korean shipbuilders is the decreasing value of shipbuilding orders.

In the first three months, Korean shipbuilders posted $9.46 billion in new orders, while Chinese companies marked $8.94 billion. But the positions reversed in April, when Korea only managed to add $375 million in new orders and China logged more than $1.5 billion.

Korea still has the highest average value per ship at $76 million, beating China’s $32 million in the January to April period. But the figure is $6 million down from the same period last year, while China’s is up $3 million.

Industry insiders said that the monthly data is not strong enough to be a measure of whether or not Korea’s shipbuilding industry will face long-term difficulties.

“As the shipbuilding industry starts to recover, many merchant vessel orders were issued, which benefited Chinese shipbuilders,” said an official from the Korea Offshore and Shipbuilding Association. “Large gas carriers and offshore plants, which Korean shipbuilders get the most orders for, are not issued regularly like merchant vessels, so it should be reviewed on a yearly basis.”

Korean shipbuilders were confident that they will bounce back as the price of ships increases and more orders come in for fuel-efficient vessels. The Clarkson Newbuilding Price Index stood at 138 points in April, its highest since December 2011.

“The price of vessels built by Korean companies is going up and the price gap between those and vessels made by Chinese companies is widening,” said Park Moo-hyun, an analyst at E*Trade Securities. “As customers look for a reliable shipyard that can provide an ‘eco-design’ of the vessel for fuel efficiency, the competition gets limited.”

Park said that the recent strengthening of the Korean won against the U.S. dollar will also push up the price of vessels because the manufacturing process is entirely localized and costs are calculated in won. He expected it will be a positive cycle for the Korean shipbuilding industry.

“As building prices have increased, ship owners are quickly placing orders expecting to make a large [profit],” he said. “As the shipbuilders’ new contracts grow, the selling price of the U.S. dollar in the exchange market is also increasing and this will lead to a strong Korean won again.”

“There is a lull in shipbuilding orders after a strong period in 2013, but it is likely to increase in the second half,” said Lee Sang-hwa, an analyst at Hyundai Securities. “From 2015, vessels made in the high building price period will start to come out, so there is a possibility for shipbuilders to turn around their performances.”