Korean-American makes an enterprise of humor

Korean-American makes an enterprise of humor 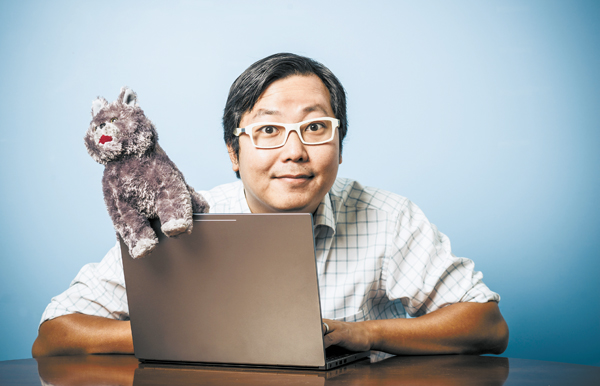 Ben Huh, the CEO of Cheezburger Network, says his company’s goal is to make the world happy for five minutes a day. Provided by Ben Huh

Korean-American Ben Huh left Seoul at the age of 10 with his parents with the hopes of living a more stable life in the United States - to fulfill what some call the “Korean dream.”

While growing up, he was nowhere near reaching that, he recalled recently in an exclusive telephone interview with the JoongAng Ilbo. But that changed in 2007 when he purchased “I Can Has Cheezburger?” - a weblog that displays pictures of animals with humorous captions.

Huh expanded his business, and is now the CEO of Cheezburger Network, which operates approximately 50 websites that feature humorous content. The monthly hits reached 375 million, and The New York Times reported in 2010, citing from the network’s chief revenue officer, that the company was bound to generate a seven-figure sum from advertising, licensing fees and merchandise sales.

After 27 years, Huh, whose Korean name is Huh Dae-young, will return to Korea to speak about entertainment-based technology during beLAUNCH, a conference on venture investment, to be held Wednesday at Dongdaemun Design Plaza in central Seoul.

The following in an edited excerpt from the telephone interview:

Q. How did you manage to successfully run a business in such a short amount of time? Do you come from a wealthy background?

A. No, absolutely not. My dad was into architecture, but he couldn’t find work in California because the state required an authorized license. So instead, he painted houses and we lived in a tiny single-room house.

Where did the idea of taking over a humor-themed website come from?

In 2007, I started a personal blog for fun with my wife about living with a dog in Seattle. Then, later that year, there was a pet food recall - news which hit main headlines all across the country. I found that the company responsible for the recall took down their website, so I dug around a little and found a cached file that included information about the company’s revenues, their facility locations and key customers. I posted this on my blog and it attracted so many viewers that my website basically got shot down. Later, I got linked to a site called “I Can Has Cheezburger,” whose operators initially showed interest in my posts. I struck up a friendship with the administrators and bought their website.

Did you imagine humor could be a business venture?

The U.S. has the world’s largest advertising market, which hints that it has the best business conditions. And humor has evolved along with humanity, because it was brought up to relieve people’s stress. The reason why there are so many jokes about the president or people’s bosses is because they are the sources of mental agony. The more complex society grows, the more the humor industry will thrive.

Company CEOs and politicians seem to be quite interested in humor themselves.

Humor is quintessential in human relationships because it’s a form of self-expression. It’s a tool that enlightens people’s spirits, and the ones who make use of it the most are prone to have the broadest human network.