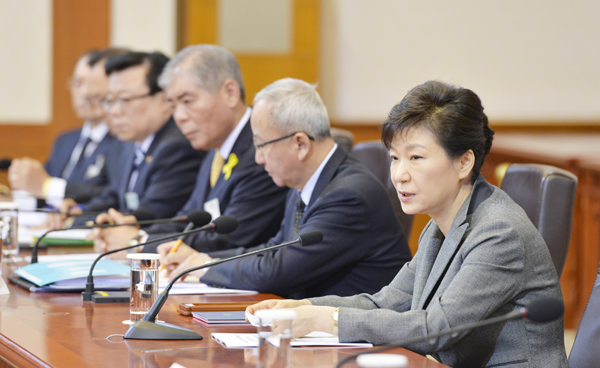 The government yesterday decided to accelerate spending of about 8 trillion won ($7.79 billion) of the year’s budget to provide financial support for regions and industries hit hard by the Sewol ferry disaster and the sag in domestic spending that followed.

At an emergency meeting on economic affairs presided over by President Park Geun-hye at the Blue House, the Ministry of Strategy and Finance announced pre-emptive measures to maintain the economy’s current pace, including front-loading of the budget, offering about 75 billion won worth of cheap loans through the Industrial Bank of Korea and some public funds to small businesses, whose sales plunged after the accident, and extending deadlines for payment of income taxes and value-added taxes by up to nine months.

“The economy has recently shown some improvement after overcoming a downturn for the last two years,” President Park said at the meeting. “The troubles of the working-class people will mount if the current recovery stops. The government should respond to poor economic indicators pre-emptively before that happens to maintain the recovery momentum.”

In the second quarter, the government will add 7.8 trillion won to its spending to try to ward off a deeper sag in economic growth.

“Despite a fair pace of recovery, the private sector has been reviving slower than expected,” said Hyun Oh-Seok, deputy prime minister and finance minister, at the meeting. “Along with internal and external risks remaining, if consumer confidence turns sour due to the impact of the Sewol ferry disaster, that might put out the embers of the current recovery.”

A report released by the ministry yesterday said private consumption and activities in the services sector slowed in April following the Sewol capsizing.

Compared to the same month last year, sales at department stores dropped 1.9 percent last month. At large discount stores, the performance was even worse, with a drop of 9.8 percent.

As a result, the total percentage of government budget spending for the first half will climb to 57 percent, up from the previous plan of spending 55 percent.

The government will also encourage public institutions to front-load budgets and investment plans and carry some out by June.

For the tourism, transportation and accommodation industries, the government will provide low-interest loans of up to 15 billion won. Small businesses in those industries that maintain the number of workers they employ will be able to receive support from the national employment insurance fund. The fund will support the companies to give employees paid leaves. They will also get a nine-month extension for payment of income and value-added taxes.

The Industrial Bank of Korea, one of three state-run banks, will offer up loans worth up to 300 million won per company.

The bank will provide a total of 30 billion won in loans.

Small merchants like owners of diners or small inns will also have access to another 30 billion won worth of loans from the Korea Credit Guarantee Fund.

Small merchants in Ansan, Gyeonggi, and Jindo County, South Jeolla, will be the first to benefit from a 915 billion won government fund set up for them this year.

Lee Ju-yeol, the central bank governor, acknowledged that the economy has been impacted by the ferry tragedy but said the current interest rate level is enough to maintain an economic recovery. The central bank yesterday froze the key borrowing rate at 2.5 percent. The rate has been frozen for a year since it was last adjusted from 2.75 percent to 2.5 percent in May 2013.

Yesterday’s decision showed that Lee has no interest for now in lowering the key interest rate, even though the impact of the ferry tragedy on the economy has raised some calls for the central bank to loosen its monetary policy.

The governor acknowledged that consumer sentiment has soured since the sinking of the Sewol.

“There are growing concerns [that the ferry tragedy] would limit the domestic market recovery,” Lee said. “And related indicators have either slowed down or been reduced.”

He said that unlike in past tragedies, after which the domestic market was affected for a month or two, the Sewol is likely to continue to depress consumer spending until the end of June. “The point is how long the poor consumer sentiment continues,” said Lee.