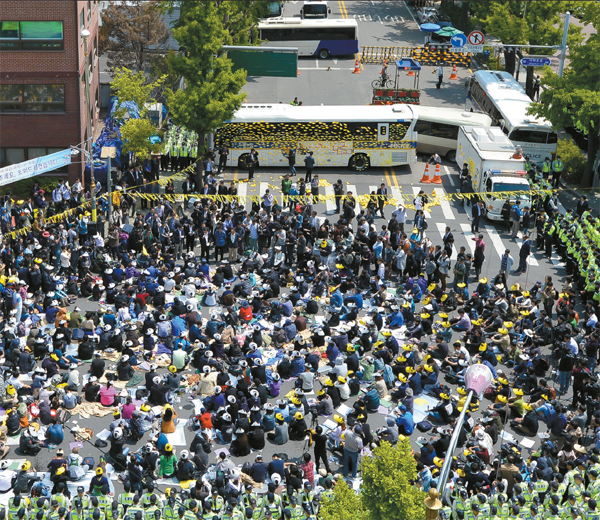 About 150 relatives of victims of the sinking of the Sewol ferry stage a sit-in yesterday in front of Cheongun Hyoja-dong Community Service Center in Jongno District, central Seoul, demanding a meeting with President Park Geun-hye and an apology from the president of the state-financed Korea Broadcasting System. The center is close to the Blue House. [NEWS1]

The families of students who perished in the sinking of the Sewol last month brought their grief and fury to the streets of Seoul Thursday and Friday - and the government of President Park Geun-hye bent over backwards to placate them.

Around 150 relatives of 11th-grade victims of the ferry sinking, the worst maritime disaster in Korean history, descended on the headquarters of the Korea Broadcasting System late Thursday night before moving their protest to an intersection 400 meters (437 yards) from the Blue House in central Seoul. They sat on the pavement holding black-ribboned portraits of their dead teenagers that were used on the mourning altars in their hometown of Ansan, Gyeonggi. They sat for hours, occasionally talking to each other, sometimes just staring at the photos of the sons and daughters taken from them.

The spark of the protest came from a remark made by the newsroom chief at the state-run Korea Broadcasting System (KBS) that seemed to shrug off their losses. At a lunch with KBS reporters, newsroom chief Kim Si-gon allegedly said, “The Sewol accident may look like it took a huge number of casualties because 300 people died at once. But the number is not that high considering the number of people killed in car accidents annually.”

But the protest in front of KBS headquarters, and the 12-hour follow-up on the intersection leading up to the Blue House, was about more than one careless remark. The families also expressed their fury about the generally positive media coverage of the rescue efforts by the government, particularly media outlets like KBS that are perceived to be influenced by the Blue House.

And by extension, it was a criticism of the government’s rescue attempts in the first day or two after the accident and its handling of the crisis in general.

Soon after the families arrived at the intersection near the Blue House, they were surrounded by rows of police. The road leading up to the presidential compound was blocked by police vehicles.

Kim’s comparison of the casualties in the Sewol tragedy and auto accident fatalities was reported by Media Today, which specializes in reporting on the media. Its source was a union official from within KBS. The report came out last Sunday.

On Thursday night, around 150 relatives of students confirmed dead in the accident removed their portraits from the joint mourning altar in Ansan, Gyeonggi, and drove in buses to KBS headquarters in Yeouido, western Seoul. They arrived at 10:00 p.m. and began a sit-in protest, demanding a meeting with KBS President Gil Hwan-young. They made clear they wanted the resignation of newsroom chief Kim and an apology from Gil.

After all their demands were initially denied, the families moved to the Cheongun Hyoja-dong Community Service Center in Jongno District to continue the sit-in. The center is about 400 meters from the Blue House. The protest continued through the night.

More than 900 police officers were deployed to the site.

At 9:30 a.m. presidential political affairs secretary, Park Joon-woo, and public relations secretary, Lee Jung-hyun, met with two representatives of the bereaved family group at the Blue House for an hour and a half.

“The family members demanded an apology from the KBS president and the dismissal of its newsroom director,” said Min Kyung-wook, the Blue Hose spokesman, during a press briefing. “They also requested a meeting with the president.

“The president has been actively open to hearing demands from the family members and responding to them,” Min continued. “[In that spirit,] she sent her political affairs and public relations secretaries in an unusual gesture to meet with the family members to hear their demands.”

The relatives complained that the media has been reporting on the rescue efforts by parroting government reports. They pointed out that the media said a large number of divers was mobilized for the rescue operations in the first few days - when some survivors may have been found within the capsized ship - when in fact the government dragged its feet in the rescue work.

KBS, a state-funded broadcaster, has been in hot water for allegedly covering the Sewol sinking in a pro-government manner. The growing criticism of its coverage led some junior reporters to issue an apology on its intranet Wednesday.

Kim Si-gon said at a press briefing yesterday he would resign.

KBS President Gil visited the relatives at 3:30 p.m. and apologized to them. “I sincerely express my apology for your feelings being hurt by the inappropriate remark by Kim,” said the president.

The families ended their protest shortly after at 3:50 p.m.