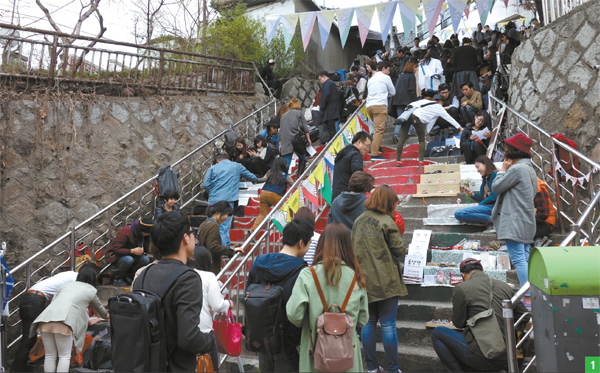 For those with a mania for vintage, flea markets are a shopper’s paradise. For up-and-coming artists, they can act as a miniature gallery. And for people looking for fun, they can be pleasurable places to hang out with family and friends.

It is officially spring, and flea markets are popping up all over Seoul.

These fairs are enjoyable opportunities for sellers with unique creations or pre-loved items to make some money while giving buyers the chance to browse for items that suit their taste.

In the past, flea markets in Korea weren’t considered the most worthwhile places to shop compared to vintage sales in cities such as London, Paris or New York, where treasure-like items are sold at reasonable prices.

In Korea, they were previously considered as less-than-trendy markets full of useless, dusty objects.

However, in recent years, Seoul has seen a new wave in the second-hand sector. Flea markets have begun to stand out not only as locales to sell and buy hand-me-down items but as places to foster young artists and designers.

Creative individuals often participate in markets to peddle their own work such as handicrafts, paintings, furniture and even independent books and magazines.

The Korea JoongAng Daily has come up with some of the most interesting local flea markets that readers can drop by on one sunny weekend this spring.

Behind Seoul Central Mosque in Itaewon, on Wosadan10 Street, there is a cluster of small ateliers and good-quality coffee shops.

Set among rusty old houses that contrast with the bustle of Itaewon’s main street, the tranquil atmosphere makes it seems like time has stopped moving.

In order to revitalize this area, artists and residents from the neighborhood formed a group called Wosadandan in 2011 and began holding the Itaewon Stair Market.

The most noticeable feature of this flea market, as the title suggests, is that it is held on a set of pedestrian stairs.

Some 70 groups of indie artists and residents gather on 60 of the steps to sell their own handmade accessories, interior items and fashion magazines.

But the gathering is not just about the goods that are for sale.

To serve the original purpose of making the local area a more festive place, unique cultural events are held at Itaewon Stair Market. Street muscians turn up with guitars to play self-composed songs, while talented painters draw 10-second portraits for 10 won, or about a penny.

Patrons can also fill their stomachs with snacks and beverages - cocktails, homemade cakes and cookies are just a few items on offer - while they shop. On occasion, street food such as sandwiches, gimbap (rice wrapped in seaweed) and ssambap (rice and meat wrapped in lettuce or other greens) are sold for about 2,000 won each.

“We want to make a joyful Wosadan village,” Oh Dahn, the manager of the market, told the Korea JoongAng Daily in an email interview.

“As our motivation is to create a fun village, we are planning more programs and an atmosphere where villagers and artists can interact more and have fun.”

The Sejong Center for the Performing Arts is seen as one of the most serious and authoritarian institutes of cultural art in Seoul.

In order to overthrow this image, the center began to hold an outdoor market in its backyard, where artists can form an interactive relationship with audiences.

Deviating from the concept of other flea markets, SoSo especially encourages the participation of literary artists. Its most prominent feature is the wide range of independent publications on display, which writers have freely jotted down their ideas on.

Sometimes there are poets who will write you a personal poem for just 8,000 won.

“Not many people actually buy these books,” said SoSo in a press release. “But we are putting more emphasis on displaying and interacting with readers rather than selling them.”

Part of the market includes a regular cultural education program that is co-created with D.Nomade, a Seoul-based design network. This year, instructors will talk about the charm of graphic design on May 17, and on June 7 there will be a lecture explaining how design can have a healing effect on people.

Events are always being added.

Searching for remarkable, one-of-a-kind items? You’re sure to find them at HongDaeAp Free Market, an art sale that has been held at Hongdae Playground since 2002.

Instead of antique furniture items or hand-me-down clothes, which are usually expected at flea markets, HongDaeAp solely allows items that have been handcrafted by participants, which is why the event has been dubbed “free” instead of “flea.”

Tailored canvas sneakers and hats with hand-painted illustrations, monogrammed bracelets and pendants, bohemian accessories with turquoise ornaments, and exotic cabochon-cut stones collected from foreign countries are just a few of the items that can be found at this weekly event.

HongDaeAp is the largest outdoor market one can find in Seoul, with as many as 120 sellers participating each time.

As Hongdae is widely acknowledged by foreign tourists as a must-see destination, many of the items here show off the beauty of Korea’s traditional culture.

You can find fans or accessories made out of hanji (traditional Korean paper) and hairpins or scarfs with oriental patterns.

During the evening, you can also enjoy live performances from indie musicians.

One thing that differentiates SAM from other art markets is its pursuit of a clear, creative concept for each product that is sold.

“We are a little different from other flea markets,” said Min Ji-hoon, the manager of SAM. “Since we are an artist market, we think that each seller should have one’s own unique concept. We pick the sellers on that standard.”

Min, who studied Western art in college, was fascinated by the idea that artists can go outside and introduce their work to the general public. This meant even more to him because he was so used to staying in the studio or an exhibition hall while working.

In 2011, he launched the first SAM, and although the number of applicants increases monthly, only 28 people receive permission to sell their products at each event.

At the market there are handmade stamps that engrave calligraphy messages on the spot, smartphone accessories, beautiful scarfs and eco-friendly bags, which all reflect a little bit of the artists’ originality. Handcrafted accessories with distinctive adornments of jade, porcelain and glass art are also available, and they retail at no more than 20,000 won.

“I’ve waited a whole week to buy this bracelet,” said Kim Ji-eun, 25, from Gangnam District, while purchasing two thread bracelets decorated with jade stones for 15,000 won each. “I bought this last time I was here, but I liked it so much that I waited to buy the same product again for my friends.”

The Bling, a nighttime flea market, is held inside Platoon Kunsthalle, a sophisticated, three-story cultural complex. Platoon is a subcultural space that holds cutting-edge exhibitions and performances.

In addition to the unique vintage clothes, handbags, designer-label products and handmade accessories, beers, cocktails, DJs and an MC appear at the event to create the feeling of a nightclub.

Rapper MC Prime participates as an MC to host interesting events such as the 1,000 won auction, where items suggested by Korean celebrities are bargained for. The money collected from the auction is donated to charity.

“Simple clothes like T-shirts are as cheap as 5,000 or 10,000 won,” said Daisy Kim from Platoon. “The price varies vastly depending on the item, but you can pick up a couple of decent products within about 50,000 won.”

Fifty stalls are allotted at the market. Celebrities, models and rising designers, as well as artists and ordinary people, participate as sellers.

Cafe Dilmah is located on the verge of Yeonhui-dong, an up-and-coming neighborhood that’s just a 15-minute bus ride away from Sinchon.

Every third Friday, in the front yard of this adorable red-roof teahouse, a handful of artists from independent workshops gather for a free market dedicated to the neighborhood.

“Our origin is Yeonnam-dong,” said Lee Jee-eun, manager of the market and owner of By Nemo, a sewing atelier in Mapo District, western Seoul.

“But two years ago, we moved the location to Yeonhui-dong because we wanted more people to visit the place. As you can see, there are so many posh cafes and restaurants here, but we were sorry that not much of it was being recognized.”

At this market’s 10 or so booths, items like bracelets with gemstones, quilted bags, dolls, pouches and wrist cushions for keyboards are sold for no more than 20,000 won. 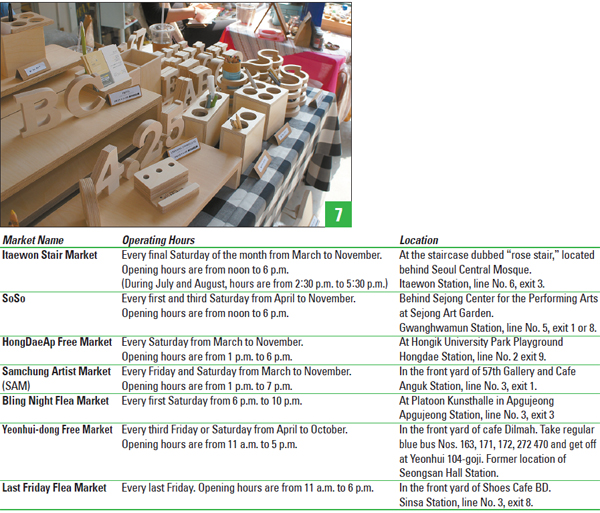 Every final Friday in a quiet residential area near Sinsa-dong’s Garosu-gil, a street that is popular for shopping and eating out, groups of store owners and individual artists gather to sell their latest or oldest items. In the front yard of Shoes Cafe BD, about 20 participants gather to hawk handicrafts or used clothes and shoes. The market was launched last year.

Because the organizers run a store for children’s shoes and an interior shop, there are many related items such as toys, quilted cushions, mobiles and home accessories.

“Our objective is to expand our market to other shops around here that also own a front yard,” said Park Min-ji, the manager of the market. “Promoting friendships among those who participate in the market and also vitalizing the neighborhood is what we are aiming for in the future.”